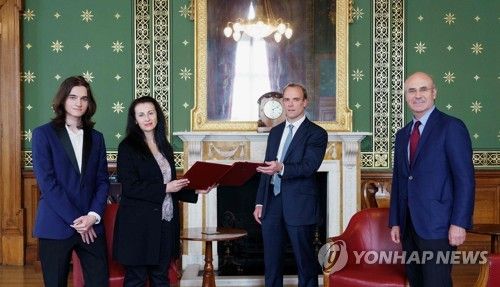 “Forty-nine individuals and organizations involved in some of the most notorious human rights violations and abuses in recent years have been designated for sanctions,” the UK Foreign and Commonwealth Office said in a statement Tuesday. “The UK has new powers to stop those involved in serious human rights abuses and violations from entering the country, channeling money through UK banks or profiting from our economy.”

They are responsible for running North Korea’s political prison camps and for the “forced labor, torture and murder [of prisoners] that takes place in North Korea’s gulags,” said the UK Foreign and Commonwealth Office.

The office added that this was the first time that Britain had sanctioned people or organizations for human rights violations and abuses independent of other governments such as those of the United States, Canada and the European Union.

“This is a demonstration of Global Britain’s commitment to acting as a force for good in the world,” said UK Foreign Secretary Dominic Raab.

The announcement arrived with Britain’s establishment of the Global Human Rights Sanctions Regulations 2020, the secondary legislation under the Sanctions and Anti-Money Laundering Act 2018.

According to the British government, the regulations can be used to impose sanctions for serious violations or abuses of human rights in three categories, namely, “an individual’s right to life; the right not to be subjected to torture or cruel, inhuman or degrading treatment or punishment; or the right to be free from slavery.”

“The United States commends the UK’s continued global leadership on the promotion and protection of human rights,” Pompeo said in a statement Monday. “This sanctions regime marks the beginning of a new era for UK sanctions policy and cooperation between our two democracies […] The United States will continue to seek out additional allies and partners to jointly leverage all tools at our disposal to deny access to the U.S. and international financial systems to all those who engage in serious human rights abuses.”