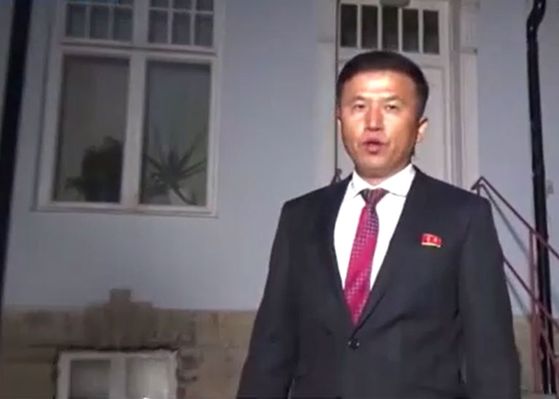 The statement from Kwon Jong-gun, director-general of the Department of U.S. Affairs at the North’s Foreign Ministry, was carried by the state-run Korean Central News Agency and came hours before U.S. Special Representative to North Korea Stephen Biegun was due to arrive in Seoul to discuss the state of relations with Pyongyang.

“Explicitly speaking once again, we have no intention to sit face to face with U.S.,” Kwon said in an English-language version of the statement, repeating a dismissal by Choe Son-hui, the regime’s first vice foreign minister, on Saturday.

“Our stand was as clear as day to be easily understood by the south using the same language as us,” he said.

Kwon went on to scoff at South Korean President Moon Jae-in for his offer to mediate talks between Pyongyang and Washington, calling him a “meddlesome man” without referring to him by name.

“Such nonsensical talks […] are ceaselessly heard from the south,” Kwon said. “They seem to have a bad ear or are guided by the habit of always talking in their own favor.”

In particular, the official ridiculed some “self-centered” interpretations by Seoul of Choe’s earlier statement, namely that Pyongyang might be employing a negotiating tactic aimed at further concessions from Washington.

“It is just the time for it [Seoul] to stop meddling in other's affairs, but it seems there is no cure or prescription for its bad habit,” Kwon said.

Using sardonic language often employed against the South, the official said, “Time will show whether its efforts will succeed or it will only suffer a loss and ridicule."

If Choe’s statement on Saturday was directed at Washington, proclaiming the regime had no intention to be used as a “political tool” by U.S. President Donald Trump ahead of his reelection bid, Kwon’s follow-up appeared to be aimed at Seoul.

The Ministry of Unification, Seoul’s top inter-Korean body, said it had nothing to say about Kwon’s statement, adding that South Korea remained of the position that peninsular issues should be resolved through dialogue between relevant parties.

In spite of elevated hopes in South Korea fed by media speculation of changes in the White House stance on denuclearization negotiations, doubts were also raised as to whether Biegun was bringing a game-changing proposal to Seoul on Tuesday.

The working group is a consultative body launched by the allies in 2018 to ensure they remain on the same page regarding Pyongyang, but detractors say it has chained Seoul to the U.S.-led maximum pressure campaign and prevented Moon from carrying out promises he made to the North during the inter-Korean summits of 2018.

That inaction on Seoul’s part is believed to be the primary reason behind Pyongyang’s aggressive escalations last month, which culminated with the unilateral demolition of the inter-Korean liaison office in Kaesong, and its repeated rejections of further discussions with either the South or the United States.

“That doesn’t mean [South Korea’s] government should abandon a mediating role; there is no other power that can effectively act to bridge the differences between North Korea and the United States,” said Lim Eul-chul, a North Korea expert at Kyungnam University’s Institute of Far Eastern Studies in South Korea.

“In that sense, we should interpret [Pyongyang’s statements] to mean North Korea wants the South to act as a proper intermediary if it chooses to continue on this course.”