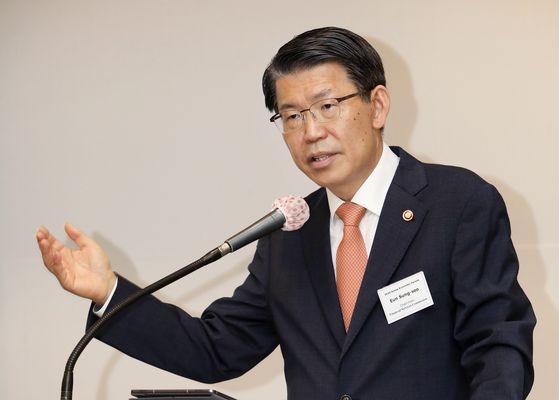 Financial Services Commission Chairman Eun Sung-soo stresses solidarity and cooperation among countries in fighting the coronavirus impact on the economy during the Korea Economic Forum held at the Millennium Seoul Hilton in Seoul Wednesday. [PARK SANG-MOON]


Financial Services Commission (FSC) Chairman Eun Sung-soo stressed the importance of cooperation not only within a country, but also globally.

“Recently many countries seem to be competitively adopting economic nationalism into their policies, with de-globalization prospect consistently emerging among various prospects of the post-pandemic era,” Eun said during the Korea Economic Forum held in central Seoul on Wednesday.

“However, the recent Covid-19 crisis reminds us of the values of not 'I' but 'We' — of community and of humanity as well.”

“We should remind ourselves of our 2008 global financial crisis experience when we overcame it through international cooperation and solidarity,” Eun said, emphasizing his own experience as a finance ministry official at the time. “When there is solidarity, cooperation and restoration of global governance, once again, we will find a way, as we always have.”

The FSC chairman during the forum shared Korea’s experiences of past crises and how they laid the foundation in helping the current administration to handle the Covid-19 pandemic.

He said governments in the past focused too much on reducing insolvency, assuming the crisis was limited to certain companies, and acted less aggressively.

He said during previous crises, the market tested the government’s insight on the crisis as well as its willingness and ability to solve the problem, but that the government failed, losing the market’s trust.

"Furthermore, fiscal authority just stepped aside at the beginning, thinking that ‘it is not my issue but just financial authority’s problem.‘ This led to a vicious cycle, requiring more and more public finance," the FSC chairman said.

Two decades since the first real economic crisis, the same question is thrown, Eun said. But the response is different, stressing that the government today recognize the severity of the problem, willing t o resolve and has the capacity in solving the problem.

The government has created three extra budgets since the pandemic started — the first time such measures have been taken in nearly half a century.


The total amount of the supplementary budgets that has been approved by the National Assembly already amounts to 59 trillion won ($49 billion), the largest ever in a single year.

The last supplementary budget that was approved by lawmakers on Friday alone amounts to 35.1 trillion won, an all-time record, breaking the previous record set in 2009.

“Ever since the first sign of this economic crisis, the government has been working to prepare swift and impactful responses based on past lessons,” Eun said.

“The financial support programs are unprecedented in their size, looking beyond six months covering all areas,” the FSC chairman said. “In terms of scale, the 175 trillion won-plus financial support package is designed to help businesses and small merchants facing liquidity crisis,” he added, noting the amount is equivalent to 9 percent of the country’s GDP.

He stressed that the government has several special purpose funds to “absorb” shock and respond to the money market crunch, a move to prevent the crisis spilling over into the real economy.

“We have secured enough capacity to provide a backstop to the financial markets and cushion shocks to the real economy,” Eun said. “A large proportion of support package funds still remain untapped.” 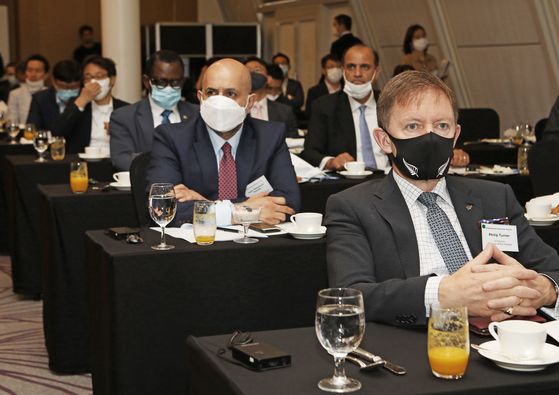 
In a surprisingly candid speech, Eun acknowledged that there is no way for the government to predict the long-term impact of the pandemic at this stage, but said the government is not only focusing on the immediate crisis but also working on creating a foundation for the future.

“We are not able to accurately predict when this pandemic will be over, but it is clear that a great transition is to come in the post-pandemic era,” Eun said. “It is important that our efforts are prepared in advance, that we are ready for the change of the society, in order to progress forward after the crisis.”

He emphasized the emergence of the “untact” lifestyle, which is becoming a “new normal." Untact is a portmanteau of the prefix “un” and contact, meaning “no contact"

The FSC chairman said triggered by the pandemic, digital transformation is rapidly accelerating.

He said this transformation is also forcing changes to the financial industry.

“The financial authority has been pursuing policies to embrace digital innovation in its services. Our financial regulatory sandbox program has already designated 106 applications as innovative services,” Eun said. “We made a major revision to the Credit Information Act to promote big-data usage effective from August. As a result, some of the new innovative financial services, such as MyPayment and MyData services, will be introduced soon."

But at the same time, Eun stressed that the FSC will continue to work on strengthening consumer protection and data security.

“The financial authorities will maintain a balanced approach in policy-making, unhindered by the speed of innovation,” the FSC chairman said.

Eun also raised awareness of the emerging risks related to abundance in liquidity resulting from the aggressive fiscal and monetary expansion in combating the pandemic.

“With the ample liquidity created by the recent expansionary monetary and fiscal policies, we expect that a ‘high liquidity, high debt’ trend will continue for some time,” Eun said. “[However,] we must not forget that financial imbalances, such as credit expansion, rising debt and asset price bubbles, have led to crises in the past.”