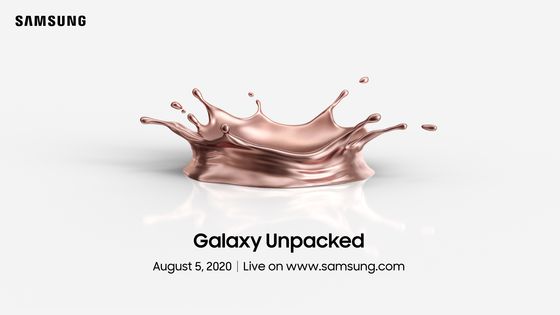 An invitation to Samsung Electronics’ release event next month. [SAMSUNG]


An enigmatic invitation posted by Samsung Electronics on its website indicates that a new product, or new products, will be introduced on Aug. 5, with no details about what exactly will be released by the company on that day.

Based on comments made by Samsung Electronics executives and development work ongoing at the company, it is likely that the Galaxy Note 20 and a new folding phone will be the models featured at the event.

Koh Dong-jin, CEO and president at Samsung Electronics, said in April that the Galaxy Note 20 and the Galaxy Fold 2 will come out “before autumn."

The invitation features a copper colored splash, which closely matches an image of a Galaxy Note 20 leaked on Samsung's Russian website earlier this month.

Unlike previous unpackings, which are normally held in the United States with a live audience, the Aug. 5 happening will be live-streamed via the company's website and newsroom.

Samsung Electronics, which has had a series of disappointments in recent years, has made a habit of hyping, and possibly leaking images of, new products and then springing them on the market at staged mystery unpackings. The company did just this when it released the Galaxy S20 in San Francisco earlier this year.

Samsung Electronics declined to comment on the models to be showcased.

If the event includes a foldable, all eyes will be on the screen, as the screen of the original Fold failed to hold up during early tests.