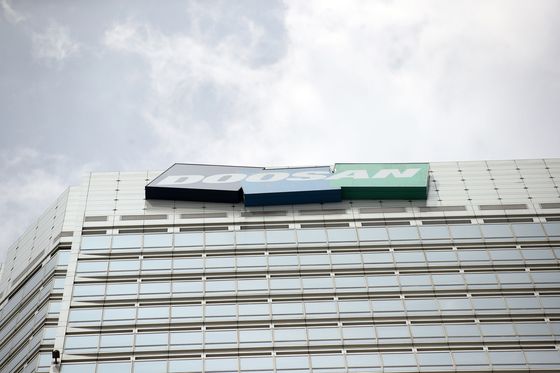 Doosan Tower in central Seoul last month. Doosan put the tower up for sale as part of the self-rescue measures. [YONHAP]

Doosan Corporation signed a memorandum of understanding with an investment group to sell its stake in Doosan Solus, according to a statement on the Financial Supervisory Services DART disclosure service.

The deal was signed with SkyLake Investment, a local private equity group founded in 2006. No decision has been made yet on price, number of shares or timing of the transaction.

Doosan Solus is an electronics parts maker that supplies copper foil and other related materials.

If all the related-party shares are sold, 700 billion won ($627 million) could be raised.

In April, it was reported that Doosan had been negotiating with SkyLake Investment to sell Doosan Solus, but the talks fell through after the two parties failed to agree on price.

Doosan Group chairman Park Jeong-won announced in June plans to raise a trillion won this year by issuing new shares and selling off assets, and Doosan Solus is seen as a good candidate for unloading.

“Although the deal hasn’t yet sealed, a preferred bidder for the purchase of a golf course in Chuncheon, Gangwon, has been designated as a consortium consisting of Hana Financial Group and Moa Miraedo,” said Kim Ji-hyang, a spokesperson for Doosan. “This will secure Doosan 180 billion won. Combined with the 700 billion won for the sales of Doosan Solus, the progress of Doosan’s goal to secure a trillion won this year is working out as planned.”

State-run Korea Development Bank and the Export-Import Bank of Korea committed a total of 3.6 trillion to the group from March and June to help it stay afloat.

The funding is expected to be spent on Doosan Heavy Industries & Construction, which owns 36.27 percent in Doosan Infracore, which itself owns 51.05 percent of Doosan Bobcat.

Shares of Doosan Solus closed on Wednesday at the same price as it ended yesterday.