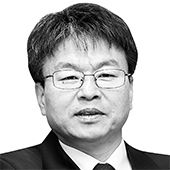 
After an outside board of the prosecution recently advised the top law enforcement agency to stop its criminal investigation into Samsung Electronics Vice Chairman Lee Jae-yong and pursuit of his indictment on charges related to an alleged accounting fraud, I revisited a report by the Hankyoreh Newspaper on Feb. 1, 2018.

The article speculated that Samsung Group’s surprising decision to split Samsung Electronics by a ratio of 50 to one aimed to influence a separate bribery trial involving Lee, shedding a positive light on Samsung Electronics after making the most valuable blue-chip stock more assessable to the general public.

The newspaper report was stunningly insightful, given the latest recommendation, albeit non-binding, by a civilian panel outside the prosecution.

Before the stock split, Samsung Electronics cost 2.4 million won ($2,007) to 2.5 million won per share — far too expensive for individual investors to afford. At the time, 53 percent of the stock was owned by foreigners, 20 percent by the Lee family members and 17 percent by institutional investors. Individual ownership came out to a mere 3 percent. The National Pension Fund, with a 9.7 percent stake in the company, was expected to reinforce its exercising of voting rights under the liberal Moon Jae-in administration. The Hankyoreh article speculated that Samsung aimed to draw more individual investors through the ambitious stock split and defend its control.

Yet the newspaper’s predictions did not pan out so easily. Retail investors were still wavering as its stock price soared to 50,000 won to 60,000 won in 2018 amid a chip boom even after the stock split. But the outbreak of the new coronavirus early this year changed things. Individual investors flocked to gobble up the stock after it fell to near 40,000 won per share. Their net purchase of Samsung Electronics common stocks totaled a record 8.87 trillion won. The number of Samsung Electronics retail shareholders increased by as much as five-fold.

The accounting fraud case involving Samsung Biologics baffles even the experts. The Financial Services Commission and Financial Supervisory Service determined that it was an accounting fraud. But the Korean Accounting Association does not agree and backs Samsung Biologics’ argument that the bookkeeping was in line with the International Financial Reporting Standards. The public cannot know who is right as the case very quicly became political.

The prosecution summoned Samsung executives 430 times for questioning on the case and conducted 50 searches over a 19-month period. The prosecution cornered Samsung in two ways. One is that Lee attempted to take the helm of Samsung Group after paying a mere 6.1 billion won in inheritance taxes. Another was the prosecution’s discovery of a computer server hidden under the floor of Samsung Biologics factory.

It hyped the discovery as a smoking gun.

But the mood has significantly changed recently. There are still comments attacking the mighty power of the Samsung empire in online articles posted by left-wing media. But they are overwhelmed by postings asking the prosecution to leave Lee and Samsung alone and give up the case after the recommendation from the civilian panel. In the past, such comments were suspected to have been paid for by Samsung. But now, retail shareholders willingly come in to defend Lee. They believe their riches in Samsung stock will be safer under the family owner and stable management. Some of their comments are really inventive and creative to suggest they are written by young shareholders.

The stock split was a shrewd and risky move. To the owner, increased retail ownership is not good, as it would have to continue tending to picky individual shareholders. Still, it may have been a radical move taken in hopes of breaking the anti-chaebol and anti-Samsung stigma. Its gamble has paid off because the prosecution’s request for an arrest warrant for Lee was rejected by a court, and an outside panel recommended that the prosecution stop its investigation and that it not indict Lee.

The prosecution will soon have to decide whether to take up the recommendation from its outside advisory board. The review board system was established under the Moon Jae-in administration to rein in unilateral — and high-handed — indictments by the prosecution. Though the outside board’s recommendation does not have a binding force, the prosecution should fear bad publicity if it presses on with indictment without physical detention.

It could risk a bigger backlash if Lee is found not guilty in a trial it pushed.

High-profile cases are turning into political issues easily. The rivaling parties and civilian organizations all have something to say. The first and second trial results often differ as a result of the ideological tendency of head judge. The prosecution also habitually appeals if the bench finds the defendant not guilty or rules for a suspended prison term. The prosecution does not have to worry about all the legal costs, but the defendants must spend and suffer more to prepare for higher court trials.

That’s essentially the equivalent to judicial torture. Indictment and three-stage trial systems have been pillars of the Korean judiciary order to ensure a fair trial for the people.

But the institutions have often become a means to torture the people on the opposition side of the political front. A society that should be protected by law is rather being pained by the law. This cannot be the norm.