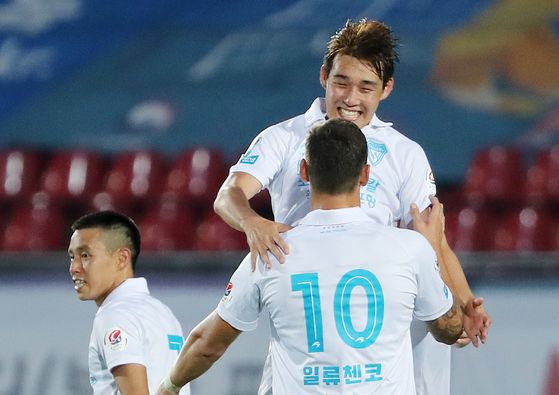 Song Min-kyu of the Pohang Steelers celebrates with his teammates after scoring a goal during a match against Seongnam FC at Tancheon Sports Complex in Seongnam, Gyeonggi, on July 5. [NEWS1]


Pohang Steelers' Song Min-kyu is playing his third season in the K League, and so far it's proving to be his best one yet.

Song's success got off to an unexpected start. When the start of the season was postponed, the league launched a video game tournament, dubbed the "K League Live Tournament," between the players to keep fans interested. Song won that tournament.

“Actually, I don’t really like playing games,” Song said. “Whichever game I play, I enjoy it for like the first two to three weeks and then quit. I have a [football] video game in my room. I played it a little, but [not much anymore].”

Song credits his success in the online tournament to his gaming experience back in high school.

“I [had] experience playing [that game] back when I was in high school for a while,” Song said. “I guess, maybe, I have a hidden talent for that game. When I play online football matches, I choose Pohang and choose Song Min-kyu as a starter. His ability [online] improved from last year, so he’s pretty handy.”

Following the online tournament, Song carried his success onto the real-life pitch. Having played in 10 matches so far this season, he’s already scored four goals while picking up two assists. In fact, he's already surpassed his 2019 season record. Last year he only scored two goals and picked up three assists while competing in 27 matches.

Pohang head coach Kim Gi-dong only has good things to say about Song this year.

“In football matches, about 70 meters [230 feet] away from the goal, it's all about the head coach’s strategy,” Kim said. “But the last 30 to 40 meters comes down to the players. Min-kyu is a player who stands out in that last 30-meter area. As he improves, our team will also get motivated.”

During Pohang’s match against Seongnam FC on July 5, Song’s performance stood out as he scored two goals and one assist. With his performance, Pohang took home a big 4-0 victory. Thanks to that win, Pohang is currently ranked fifth in the K League 1 regular season table with six wins, one draw and three losses, totaling 19 points. In terms of points, Pohang is currently tied with Daegu FC and is only one point behind the third ranked Sangju Sangmu FC.

This match also left quite an impression on Korea’s U-23 team head coach Kim Hak-bum, as he was at the game looking for potential players for the Tokyo Olympics, which is expected to be held next year.

At age 20, Song could be forgiven for pushing for a spot on the Tokyo Olympic team, his only shot as the football tournament has an age limit of 23 years old or younger, with the exception of three wild cards. He might also be vying for the K League’s Young Player Award as this is the last season he is eligible for the award. Such an award can only be received by players who are in their first three seasons in the league.

But for now, Song’s only goal is to compete at the Asia Football Confederation (AFC) Champions League with his teammates at Pohang.

“A lot of people have told me to aim for the Tokyo Olympics and K League’s Young Player Award,” Song said. “But I’m trying not to think about it. Once I improve with the team, I believe that individual honors will come along. I want to improve from where I’m at now and become a player like the people have never seen in K League history.”

Pohang will continue its season with a match against the Suwon Samsung Blue Wings at the Pohang Steelyard on Saturday, July 11. The match is expected to kick off at 7 p.m.