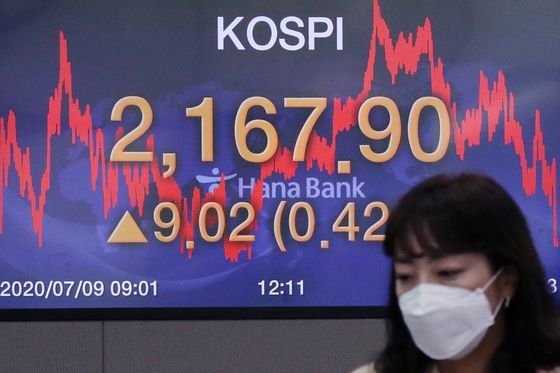 A screen shows the closing stats for the Kospi in a trading room at Hana Bank in Jung District, central Seoul, Thursday. [NEWS1]

"Untact business shares are expected to fly high due to possibilities that the Covid-19 pandemic may remain uncontained for a long time," Daeshin Securities analyst Lee Min-ah said.

Despite a new daily record number of virus cases in the U.S., the tech-laden NASDAQ Composite advanced 1.44 percent to close at a fresh record high of 10,492.50 on Thursday.

The local currency closed at 1,195.50 won against the U.S. greenback, unchanged from the previous session's close.

Bond prices, which move inversely to yields, closed lower. The yield on three-year bonds rose 0.1 basis points to 0.84 percent, while the return on the benchmark ten-year government bond added 1.9 basis points to 0.66 percent.