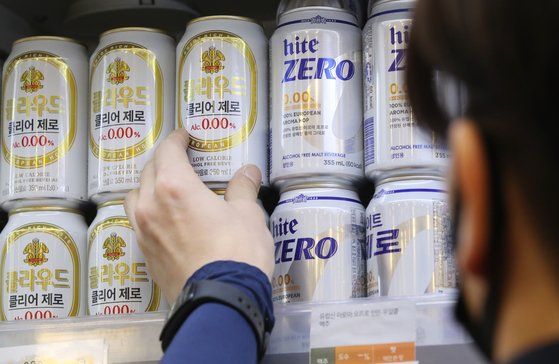 A man picks up a can of Kloud Clear Zero, a nonalcoholic beer from Lotte Chilsung Beverage, at a supermarket in Seoul. [YONHAP]


As the summer heats up, more and more Koreans are cracking open a cold one — a cold nonalcoholic beer that is, with sales of the alcohol-free drinks shooting up so fast the growth rate is expected to overtake regular beer in the next few years.

Recognizing the trend, beer manufacturers have jumped on the bandwagon, including Oriental Brewery that recently announced plans to release a nonalcoholic version of Cass, Cass Zero.


According to the Korea Agro-Fisheries & Food Trade Corporation last month, the global nonalcoholic beer market is projected to post annual growth averaging 23.1 percent every year from 2019 to 2024. The statistics is nearly seven times larger than the estimated 3.2 percent growth for the regular beer market.

Last year, the market value of nonalcoholic beer in Korea was estimated at about 10 billion won ($8.3 million), which only accounts for around 0.25 percent of the total beer market, at 4 trillion won.

The nonalcoholic beer market has been growing rapidly this year. Sales of alcohol-free beer in the first half of the year increased 22.7 percent, not significantly different from the regular market. According to the report released by the Korea Agro-Fisheries & Food Trade Corporation, the market for nonalcoholic beer is expected to grow further and eventually take up to 2 to 3 percent of the total beer market.

Hite Zero, released by Hite Jinro in 2012, has also seen sales increase 26 percent during the first half of the year compared to the same period a year earlier.

As Oriental Brewery recently announced Cass Zero, the competition is intensifying in the alcohol-free beer industry.

According to the report from the Korea Agro-Fisheries & Food Trade Corporation, the reason behind the nonalcoholic beers’ popularity is people’s growing preference for healthier products. Another reason is because companies tend to not have team dinners, or hoesik, and people tend to prefer to drink lighter drinks.

The government’s intention to strengthen traffic laws, enhancing safety in school zones, referred to as the Min-sik Law, has been boosting nonalcoholic beer sales as well.

“We are targeting beer lovers who enjoy drinking beer but are unable to drink due to unavoidable circumstances such as working and driving,” said an employee from Lotte Chilsung Beverage.

Technically, nonalcoholic beer is a type of soft drink.

Kloud Clear Zero and Hite Zero are both classified as “carbonated drinks” by their companies, Lotte Chilsung Beverage and Hite Jinro.

Despite the absence of alcohol, people under the age of 19 are not allowed to buy nonalcoholic beer because of its resemblance to real beer.

Under Korea’s Special Act on Safety Management of Children’s Dietary Lifestyle, the government prohibits the sale of foods “made in the form of money, Korean playing cards, cigarettes, or liquor bottles.”

Bottles of alcohol-free beer are clearly marked with labels saying that the beverage is for adults and only people who are aged 19 or above are allowed to purchase it. In convenience stores, nonalcoholic beers are displayed in the liquor section.

Not all nonalcoholic beers are completely alcohol-free. Under Korean law, a beverage with an alcohol content of 1 percent or lower is not classified as alcoholic.

There are two types of nonalcoholic beer — fermented and unfermented.

Unfermented beer, which is completely free of alcohol, is made based on a malt extract with added hops to give the brew its bitter flavor. Lotte Chilsung Beverage’s Kloud Clear Zero and Hite Jinro’s Hite Zero are examples of these completely alcohol-free beers.

Fermented beer, on the other hand, may have very small amounts of alcohol remaining in it. The final product has a body and taste that is very close to a regular beer. Germany’s Clausthaler, which has been producing nonalcoholic beers for 40 years, and Tsingtao both make fermented nonalcoholic beer.