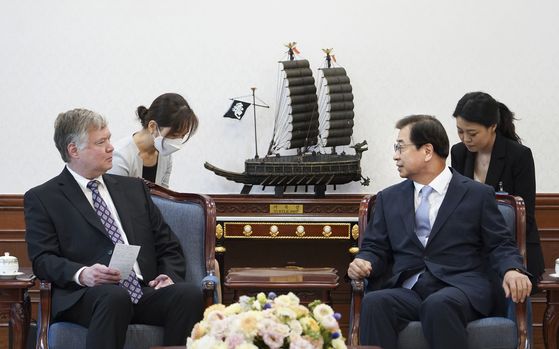 Suh and Biegun, who doubles as the U.S. special representative for North Korea, held a 70-minute talk Thursday morning at the Blue House discussing Pyongyang’s recent moves, how to make progress in paving peace on the Korean Peninsula and other pending bilateral and regional issues.

Biegun was wrapping up a three-day trip to Seoul, and it was his first face-to-face meeting with Suh since he was appointed national security adviser last week by President Moon Jae-in, replacing Chung Eui-yong.

The Blue House said in a press release that Suh “regarded highly Biegun’s commitment toward resuming North-U.S. dialogue and requested for a continuation of such efforts.”

Biegun in turn was said to have stressed the importance of resuming talks with Pyongyang and added Washington will “maintain a close cooperation system” with Seoul.

Suh served as director of the National Intelligence Service (NIS) and was one of the key South Korean players involved in diplomatic efforts that led to the first summit between North Korean leader Kim Jong-un and U.S. President Donald Trump in Singapore on June 12, 2018.

Suh, along with Chung, did a lot of the initial legwork that led to both inter-Korean and North-U.S. summits, including a visit to the White House in Washington in March 2018. The early stages of the denuclearization negotiations involved intelligence channels that included U.S. Secretary of State Mike Pompeo — who was director of the Central Intelligence Agency (CIA) at the time — making a secret trip to Pyongyang in early April 2018.

After his talks with South Korean diplomats Wednesday, Biegun stressed that he is ready to resume dialogue with the North when leader Kim Jong-un appoints a negotiating counterpart.

Last week, North Korean Vice Minister Choe Son-hui shot down the possibility of another summit with the United States ahead of the U.S. presidential elections in November stating that she does not see a need to have “face-to-face” talks with Washington.

Apparently responding to this statement, Biegun, speaking to reporters in Seoul Wednesday after meeting with Foreign Ministry officials, said, “I do not take my direction from Vice Minister Choe Son-hui,” nor from John Bolton, the former U.S. national security adviser who is a hard-liner on Pyongyang policy.

Biegun, who has maintained a flexible approach toward the North, took a rare tough stance on Choe. Choe has often been considered Biegun’s counterpart in working-level denuclearization talks, though Pyongyang has rotated its negotiators throughout the dialogue process.

A prepared statement by Biegun released by the U.S. Embassy in Seoul Wednesday further elaborated, “Both [Choe and Bolton] are locked in an old way of thinking, focused on only the negatives and what is impossible, rather than thinking creatively about what is possible.” Biegun did not include this sentence when actually addressing reporters.

In his message aimed at the North, Biegun said, “When Chairman Kim appoints a counterpart to me, who is prepared and empowered to negotiate on these issues, they will find us ready at that very moment.”

Biegun departed Seoul Thursday afternoon at around 4 p.m. from the Osan Air Base in Pyeongtaek, Gyeonggi, for Tokyo. He will meet with Japanese officials Friday and head back to Washington wrapping up a four-day trip to the region.

While Biegun and Trump signaled a willingness to resume talks with Pyongyang, U.S. Secretary of Defense Mark Esper reverted to a hard-line stance on the North in a joint statement with his Japanese and Australian counterparts.

In the joint statement Tuesday, the defense chiefs called on North Korea to “take clear steps to achieve the complete, verifiable, and irreversible dismantlement of its weapons of mass destruction and ballistic missiles programs of all ranges.”

Since the first North-U.S. summit in 2018, Washington has generally avoided using the terminology “complete, verifiable, irreversible denuclearization,” or CVID, which has not been favored by Pyongyang.

The U.S. State Department in a statement Monday said that Biegun plans to “strengthen coordination on the final, fully verified denuclearization,” or FFVD, of North Korea.

The statement by Esper, Kono and Reynolds also called on Pyongyang to “return to the negotiating table and make a sustained commitment to dialogue” and in the meantime, they “reaffirmed their commitment to implement and enforce sanctions against North Korea,” including cooperation to “monitor and deter illegal ship-to-ship transfers of refined petroleum, coal and other sanctioned goods.”

This moves comes in spite of Trump, who on the same day said in an interview with Gray Television, that he would contemplate the idea of a third summit with Kim Jong Un if it was "going to be helpful."

On the same day, Esper — in a video message marking the one-year anniversary of the implementation of the U.S. National Defense Strategy, which seeks to contain strategic competitors China and Russia — described North Korea as a "rogue state," another terminology that has been criticized by Pyongyang.

Esper said that the Pentagon has "deterred aggressive activities perpetrated by rogue states such as North Korea and Iran, as well as near-peers such as Russia and China.”