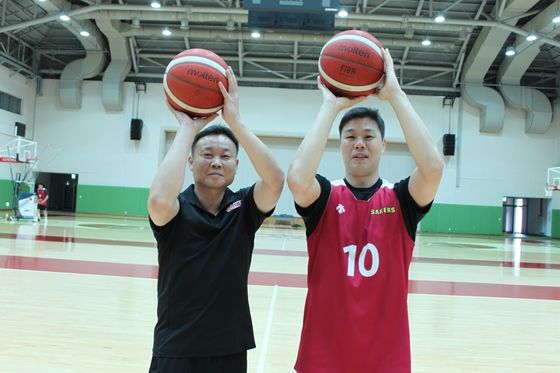 Head coach Cho Sung-won, left, and the club's veteran guard Cho Sung-min hope to lead the club back up to the top in the upcoming 2020-21 season. [PARK RIN]

Head coach Cho Sung-won has returned to Changwon to save the struggling LG Sakers.

With the 2019-20 Korean Basketball League (KBL) regular season ending earlier than expected, the Sakers ended up finishing ninth out of 10 clubs. To try and turn things around, they’ve brought back local hero Cho an entire 18 years after he left the team.

During his first stint as Sakers coach, Cho led the club to a runner-up finish at the KBL Championship during the 2000-01 season. Under Cho, during that season, the Sakers’ scoring average per match was 103.3 points.

Although Cho might be unfamiliar with his new squad, they certainly know who he is. Sakers' veteran guard Cho Sung-min grew up being told to play like his new coach, who was nicknamed the kangaroo shooter for his impressive hang time back when he was a player.

“Back when I was in college, my head coach told us to shoot like Cho Sung-won,” Cho Sung-min said. “So the kangaroo shooter was someone we looked up to.”

Although he only stands at 1.80 meters (5 feet 11 inches), the respected coach was known for his great shots. To overcome his relatively short stature, Cho Sung-won said that he trained five times a day.


“These days, there are only about 10 matches per season with teams scoring over 100 points,” Cho Sung-min said. “I watched a match where the head coach scored 48 points all by himself.”

Head coach Cho addressed the low-scoring games during his inauguration ceremony back in April.

“During that time, when the opposing team scored two points, we had to score three points,” Cho Sung-won said. “From the bench at the time, we only picked up rebounds and fouls. It was 48 points [that I scored] with three minutes remaining in the match. If I was aware of the situation at the time, I would have exceeded 50 points.”

Not only do head coach Cho Sung-won and Cho Sung-min have the same surnames, but both are also known for their shooting skills.

Back at the 2014 Asian Games, Cho Sung-min made headlines by leading Team Korea to win gold. His outstanding performance crowned him with the nickname of Korea’s Shooter.

But things went downhill when he joined the Sakers in 2017. Last season, he finished with a disappointing scoring average of 2.8 points per match. Despite his struggles, other clubs in the KBL tried to steal Cho Sung-min, but head coach Cho Sung-won declined them all.

“Sung-min is a shooter who represented Korea,” head coach Cho said. “Back when he was at his peak, his shooting accuracy was first [in the league]. He plays the same position as I did, so I felt bad. I wanted to make him honorable.”

Looking forward to the new season, head coach Cho is hoping to take basketball back to its heyday when high scores were common on the court. In recent seasons, teams have been playing more defensively. Last season, the average scoring leader was Wonju DB Promy, at 83.5 points per game.

As teams try to play it safe and only monitor their win-loss record, many fans feel the sport has become less exciting, eventually leading to the KBL's decline in popularity.

“When I first joined LG, I said that I wanted to win both the regular season and the championships,” said Cho Sung-min. “Along with head coach Cho, I think that we can fulfill that dream together.”

To rekindle basketball's popularity and to make it an exciting game like the past, head coach Cho is ready to let his players be more offensive in the upcoming season. Last season, the Sakers’ scoring average per match was at 72.6 points, last in the league.

“If the opposing team scores 100 points, then we’ll play a match where we score more than 100 points,” Cho said during his inauguration ceremony. If our opponent scores 80 points, then we only need 90 points to win. I’m telling the players to shoot three-pointers without thinking about it. Especially in crucial moments, I expect Sung-min to score about two to three of them in a row.”

We won't find out until the start of the new season whether the Sakers' bold new approach will work, but for now, head coach Cho has changed the club’s training schedule completely.

The Sakers recently had six practice games against college teams. Cho had the team focus on quickly transitioning between offense and defense. For now, Cho said that his goal is to have his team make 80 passes or more per match.

In addition to making more passes and emphasizing teamwork, Cho has given his players a lot more freedom in their training. These days, the Sakers have two training sessions, where they train for one hour in the morning and another hour and a half in the afternoon. During their offseason training at Yanggu in Gangwon, Cho Sung-won got rid of the team’s tradition of running up the mountains. Instead of running, he tells his players to walk up the mountain as if they’re on a hike.

“On mountains, where it’s steep, I tell them to walk up slowly,” Cho said, “We don’t play basketball on mountains. Just because they hike well doesn’t mean that they run well on the court. Back when I was a player, I was the very last one to reach the top of the mountain.”

Cho decided to change his tactics in training after years as head coach of the KB Stars of the Women’s Korean Basketball League (WKBL) and for Myongji University.


“At first, I tried training them intensely,” Cho said. “But it was better to have short and quality [training] sessions.”