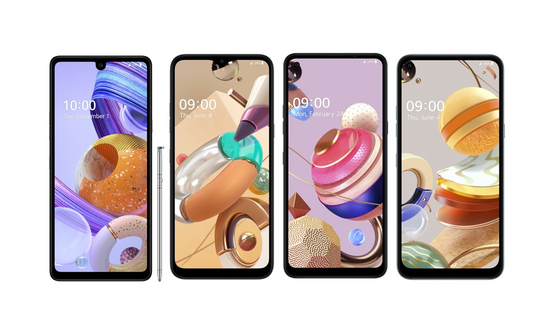 
LG Electronics said Thursday its budget smartphones will be released in more countries as part of efforts to recover from the impact of the coronavirus outbreak.

According to LG Electronics, its K series smartphones — models K61, K51S and K41S — will be available in six more countries, including Panama, Peru and Costa Rica, starting this month.

The company is targeting global markets, as more people are opting for more affordable devices since the emergence of Covid-19.

Currently, K series models are available in a total of 15 countries worldwide. LG Electronics said they will be introduced in more countries by the third quarter.

Featuring a cluster of four cameras on the back of the phone, the trio features 6.5-inch displays and 4,000-milliamp-hour batteries. They meet MIL-STD-810G — a U.S. military certification related to resistance to heat, humidity, vibration and sunlight.

“[LG Electronics] has been keeping its position as top three in North America and top five in South America,” an employee from LG Electronics said. “[As we are planning to] launch more budget smartphones, the market share is expected to grow.”

LG is boosting its presence in India, the second largest smartphone market after China. Increasing anti-China sentiment due to the ongoing border disputes may be helping the sale of Korean phones in this market.

In India, the sale of LG Electronics smartphones has been up tenfold in the past two months, the Economic Times reported on July 5.

Under the slogan “India Specific and India First,” LG Electronics introduced the W series of budget smartphones in India earlier this year.

Despite growing popularity, the company has yet to see a significant market share in India as Chinese manufacturers still dominate the country’s smartphone market.

According to a report by Counterpoint Research, China's Xiaomi secured the No. 1 spot in the Indian smartphone market with a 30 percent share during the first quarter of the year. China’s Vivo was No. 2, with 17 percent, while Samsung Electronics was No. 3, with 16 percent. Realme accounted for 14 percent and was No. 4, followed by Oppo, No. 5 with 12 percent. Four out of five top smartphones in India by share are manufactured by Chinese companies, taking up to nearly 70 percent of the total market value.

Budget smartphones from LG Electronics could help the company turn around, as it has been losing money in the smartphone business for 20 quarters.

In May, LG Electronics introduced Velvet in Korea, with a price tag of 899,800 won. The price is considerably lower than that of flagship smartphones from other electronics companies, such as Samsung or Apple, which are generally priced over 1.5 million won.

Along with the expansion of its budget smartphones business, LG Electronics is planning to adopt an Original Development Manufacturing (ODM) strategy in more sectors.

“ODM by LG Electronics, which was about 30 percent of total smartphone business last year, is expected to double to 70 percent this year,” KB Securities analyst Kim Dong-won said. “Starting the second half, [the company’s] deficit [in the smartphone business] is likely to reduce with changes in cost structure."