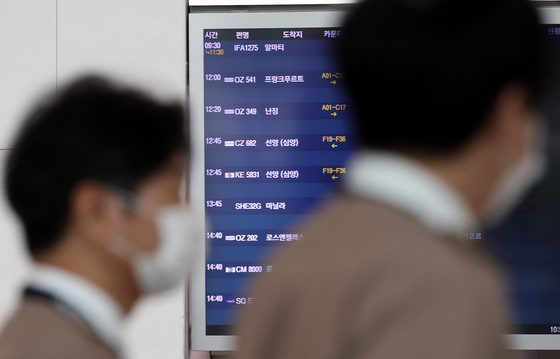 
Korea’s Transport Ministry said Sunday it will expand air routes connecting Korea and China from the current 10 flights a week to 20 in July.

The ministry said the latest extension of flight schedules is to help Korean companies normalize business with China as well as to help Korean students and residents who had stayed in China get back.

Airlines from Korea will be able to operate a total of 10 flights per week, with the other 10 flights operated by Chinese carriers.


At the moment, 10 airlines, three of which are Korean and seven Chinese, operate flights between the two countries. Currently, each airline operates one route per week.

In Korea, Korean Air is running a flight to Shenyang, Asiana Airlines to Changchun and Jeju Air to Weihai, all of which take off from Incheon.

Back in March, the Chinese authorities drastically downsized the number of international flights in order to limit the spread of Covid-19 as the number of newly infected patients was on the downturn in the country while other countries were just starting to report their first spikes in cases.

Companies in Korea that do business with Chinese partners have been struggling to normalize operations as routes to China have essentially been shut down since then.

“A partial resumption of international flights between Korea and China will be able to resolve some of the difficulties that Korean companies had to endure,” the Ministry of Land, Infrastructure and Transport said in a release Sunday.

The newly reactivated services will start with a flight connecting Incheon and Nanjing from Asiana Airlines. The airline resumed the route on Sunday after grounding the flight 105 days ago, the company said. The flight will take off at 12:20 in the afternoon from Incheon and return at 2:50 p.m. It is the first Korea-China route to resume since March.

Air Busan said last week that it plans to resume the flight starting on July 17 if the approval is issued as planned.

The ministry said the additional expansion of routes is also possible if no passengers on flights connecting Korea and China test positive for the coronavirus for three consecutive weeks.