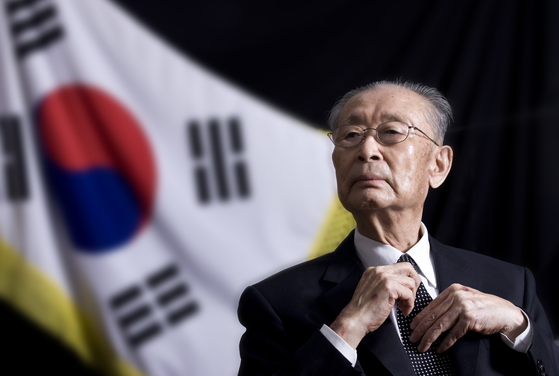 
Paik Sun-yup, South Korea's first four-star general and a hero of the 1950-53 Korean War who played a key role in forging Seoul’s alliance with Washington, died Friday night in a hospital in southern Seoul. He was 99.

The Republic of Korea Army on July 11 confirmed that Paik had died a little after 11 p.m. on July 10 at the Seoul Asan Medical Center in Songpa District, southern Seoul.

While he had initially planned to become a teacher, Paik graduated from Manchuria’s Mukden Military Academy in 1941 and became a commissioned officer in the Manchukuo Imperial Army. Manchukuo was a puppet state established by Japan in Manchuria. He served as a Japanese army lieutenant during World War II. Japan was defeated in World War II, leading to Korea’s liberation from colonial rule in 1945. The peninsula was divided into the U.S.-backed South and the communist North.

On the onset of the Korean War in 1950, Paik was assigned as a division commander in the 1st Infantry Division of the South Korean army.

During the Korean War, Paik is best known for leading his troops to victory in the Battle of Tabu-dong, a critical moment in the defense of the Busan perimeter in September 1950, and in deterring the North Korean military.

Pushed to the brink of destruction in the early months of the war, South Korean forces drew a last line of defense along the Nakdong River to fight back the advancing North Koreans.

Paik is famously quoted as telling his soldiers during the battle, "There is nowhere to retreat now. [...] If we are pushed back, the U.S. troops will withdraw. Then the Republic of Korea will be over. I will be at the forefront as your commander. If I retreat in fear, shoot me first."

He later remembered the battle, which ended in the victory of the United Nations forces, as his fiercest ever.

Paik’s performance in the battle was highly regarded by his U.S. counterparts. He was appointed as chief of staff of the South Korean Army in July 1952.

On Jan. 31, 1953, 33-year-old Paik became the South Korean Army's first-ever four-star general. The Korean War ended later that year with an armistice agreement, and Paik was one of the South Korean representatives who partook in ceasefire talks.

In 1959, Paik became the chairman of the South Korean Joint Chiefs of Staff.

After retiring from the military the following year, Paik began a second career in diplomacy serving as ambassador to the Republic of China, France, the Netherlands, Belgium and Canada in the 1960s. He later served as transportation minister from 1969 to 1971.

South Korea established the General Paik Sun-yup Award in 2013 to award U.S. personnel considered to have contributed to the nation's security and the bilateral alliance.

Despite his illustrious military career, Paik's service in the Manchukuo army has led to accusations that he collaborated with Japan. Those accusations continue today, with questions raised over whether he should be buried in the national cemetery.

In 2009, Paik was included by a presidential committee on a list of pro-Japanese figures that collaborated with Japan during its colonial rule over the Korean Peninsula.

While Paik acknowledged that he had served in a Manchukuo Imperial Army unit responsible for fighting against Korean guerrilla fighters in the early 1940s, he claimed he had never engaged in battle with Koreans.

The Center for Military Human Rights Korea on Sunday called for the cancellation of Paik’s burial at the national cemetery in Daejeon.

South Korean Defense Minister Jeong Kyeong-doo, U.S. Ambassador to Korea Harry Harris and Gen. Robert B. Abrams, the commander of the U.S. Forces Korea (USFK) were among the public figures to pay their respect to Paik at his wake at the Seoul Asan Medical Center over the weekend.

Paik’s military funeral will be presided over by Army Chiefs of Staff Gen. Suh Wook. He will be buried at the Daejeon National Cemetery on Wednesday.

Paik is survived by his wife, two sons and two daughters. 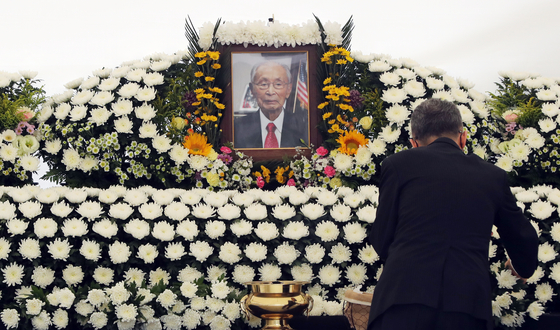 People pay their respects to the late Paik Sun-yup, South Korea’s first four-star general and a hero of the 1950-53 Korean War, at a memorial altar in Gwanghwamun Square, central Seoul, Sunday. A military funeral is scheduled for Wednesday. [YONHAP]