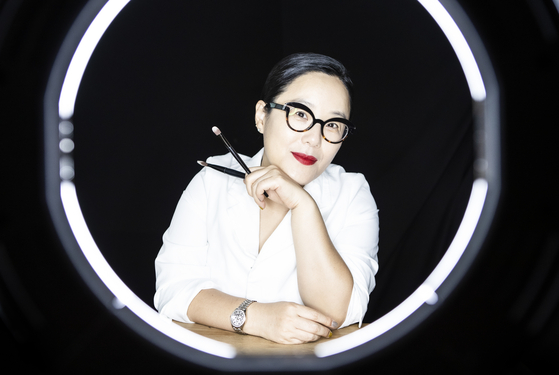 Makeup artist Jung Saem-mool recently published a book in which she details the struggles she faced during her childhood and how they motivated her to succeed. [KWON HYUK-JAE]


While makeup artist Jung Saem-mool's name might not be as well known as the stars she's worked with, like Lee Hyo-ri, Kim Tae-hee and Ko So-young to name a few, the 50-year-old's career has been just as illustrious.

Decades have passed since her debut in 1991, but the makeup artist remains at the top of her game, successfully juggling many different projects, such as running her makeup studio, producing cosmetics under her name and running an academic institute, in which she educates makeup artist hopefuls.

Jung seems to have it all, but she candidly shares how her life has not always been so easy in her latest book, “I Believe in Myself Today.”

In the book, Jung describes the shantytown she used to live in and her middle school days when she couldn’t afford to pay tuition so her teacher would often single her out.

During a recent interview with the JoongAng Ilbo, Jung said, “Those bitter memories from my childhood days were lingering in me until I became an adult.”

Jung continued, “I’ve been counseling young adults in their 20s and 30s since five years ago. When I openly talk about my experience first, they begin to talk about their problems. I thought I was born to do this, so I made up my mind to talk frankly about my own stories.”

Things were turned upside down for Jung when her father started having a hard time in business. She was just a teenager but took on any part-time job she could, from serving at restaurants, selling clothes at a department store, working at a fabric store and babysitting.

“I was a little girl, but I had four other siblings younger than me and had to support my family,” she recalled. After school, she didn’t have time to chat over snacks and sodas with her friends and instead went straight to work. Despite her best efforts, creditors would often come knocking on the door of her house.

As a way to escape the pressure she was under, the young Jung began making a scrapbook in which she would stick images of stylish women, beautiful houses and happy families that she had cut out from magazines and newspapers.

Jung describes her scrapbook as “an imaginary castle created by a poor child.”

She also used her scrapbook to reflect on who she was and what she wanted.

“I had to figure out what I was better at than others. I had to find out what made my heart flutter.”

Jung recalls one particularly impactful interaction she had with a foreign missionary.

While handing out vanilla-flavored cookies at church, the missionary told her, “You’re so special that there’s no one that compares to you."

Jung recalled, "I never heard such a compliment before. I had to prove that I was special.”

Jung says it took a long time for her to discover her true identity.

Through years of scrapping, Jung learned that she is much more observant than others. She also realized every person is just as important as one another. It was that realization that led her to come up with her own makeup application methods that would accentuate the uniqueness of each of her customers instead of trying to hide them.

But the journey to embracing those differences was a long one, stemming from her own insecurities. “I used to dab thick layers of makeup on my face. I hated my small eyes. And I hated being short.

“After graduating from high school, I put makeup on my eyes to try to make them look three times bigger than their normal size.”

An “aha” moment came when her mother told her, “Saem-mool! Real masters make you wonder what they did. You need to make people wonder what you did on your face.”

She instantly removed the strips she had been using to make her eyes appear more open and began embracing a more pared-back approach. 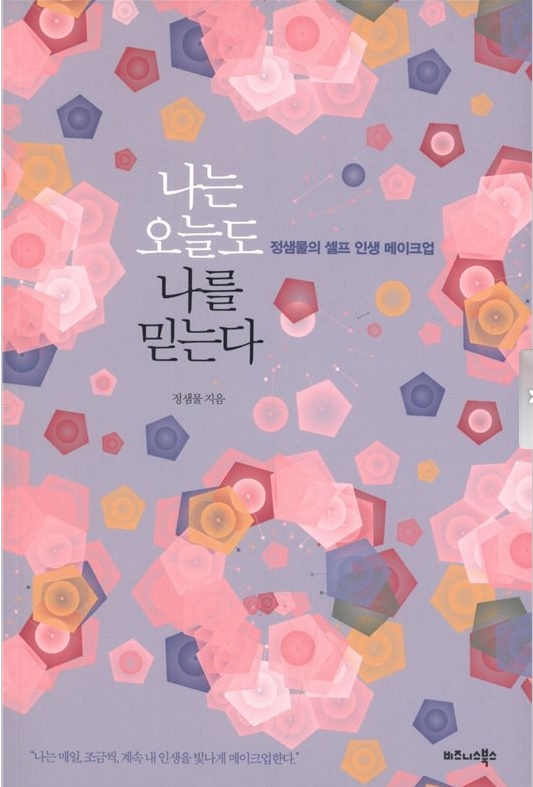 Jung’s book titled ’I Believe in Myself Today.“ [BUSINESS BOOKS]


After overcoming the difficulties of her childhood, Jung says her ultimate goal as a makeup artist is “making people realize that there is no need to compare themselves to others.”

She continued, “A lot of people want to meet me in person after I finish giving my lectures. They say ‘My eyes are uneven,’ or, 'My nose is too big and blunt.' I tell them to focus on what they have and believe in their original beauty.”

“Even celebrities who are pretty from top to toe think that they are not enough. I try my utmost to make them forget about their complexes with my makeup so that they can focus on the original lines, colors and texture of their own.”

Of all the important chapters in her life, the most crucial moment came when she met actor Lee Seung-yeon.

“I worked as a freelance makeup artist for her when she did the 1994 drama series, ‘Love You in My Arms.’ After the drama ended and I didn’t see her for a while until she appeared in a TV show. I saw her face on the screen and went to Cheonggyecheon [a stream that flows through downtown Seoul] right away.”

The area in central Seoul is lined with secondhand bookstores, and it was here that she stocked up on foreign fashion magazines and books to go back to her roots — scrapbooking.

She made a makeup proposal for Lee who, after reviewing it, hired Jung as her makeup artist saying, “You’re amazing.”

Lee also introduced Jung to other stars such as Ko So-young and Kim Hee-sun and told them “Jung deserves to be treated as a top makeup artist.”

Her career was on an upward trajectory, but she left it all behind in 2006 to go and study at the Academy of Art University in San Francisco.

“I lost track of time when I saw drawings of Rembrandt when I was young. I desperately wanted to study art.”

In school, she learned all the basics of painting. She also learned how to draw the bones of a person through a class on dissection. That class helped her a lot to have a clearer picture of the world of makeup.

“Unless you know something about bones, you can’t understand how muscles and wrinkles work. After learning all the things, I was able to lay the groundwork for makeup.”

Most of her acquaintances were opposed to her decision to go abroad, but she says her time in San Francisco changed many things in her life.

“Whenever I feel scared and afraid, I challenge myself to try something new and see it as giving myself a chance.

“My mission is to help not only me but also to help more people know their abilities and use them more.”