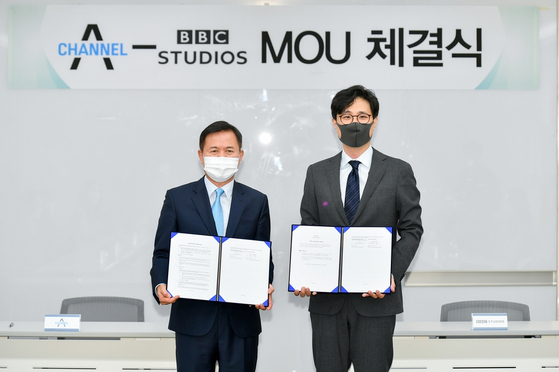 Kim Cha-soo, CEO of the cable network Channel A, and Gao Lee, a representative of the BBC Studios Northeast Asia, signed a memorandum of understanding on Friday. [CHANNEL A]


Cable network Channel A and BBC Studios signed a memorandum of understanding to collaborate on developing their content, Channel A announced on Monday.

The two plan to “reinforce their mutual competitiveness” through distribution of digital content, co-planning and producing global programs.

The content of BBC Studios will be aired through Channel A starting this September.

In the ceremony which was hosted at Channel A's building in central Seoul, Kim Cha-soo, CEO of the network, stated, “This contract is very meaningful in the limelight of the centennial of the Dong-A Media Group this year and the 10th anniversary of Channel A next year. We hope to able to provide BBC’s global and influential content through our channel.”

“This is the time we need to cooperate in order to deal with the fast-changing media environment,” Geo Lee, representative of BBC Studios Northeast Asia said. “We are looking forward to the coexistence through partnerships with Channel A and overall contents industry.”