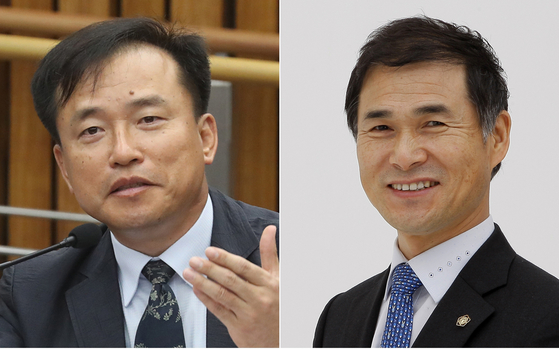 The Democratic Party (DP) on Monday names Kim Jong-cheol, a law professor at Yonsei University, left, and Chang Sung-keun, a lawyer, as members of the nomination committee to recommend candidates to head the Corruption Investigation Office for High-Ranking Officials to the president. [YONHAP]


The ruling party on Monday started the process to recommend candidates to head the new investigation agency for senior public servants, despite ongoing protests from the opposition.

The Democratic Party (DP) said Monday that it decided to appoint Kim Jong-cheol, a law professor at Yonsei University, and Chang Sung-keun, a lawyer, as members of the nomination committee that will recommend President Moon Jae-in candidates to head the Corruption Investigation Office for High-Ranking Officials (CIO).

Ahead of the scheduled launch of the CIO on Wednesday, the nomination committee is supposed to offer President Moon two candidates to choose from. Despite dwindling time left to open the CIO, the nomination process has yet to start, as the main opposition United Future Party (UFP) has refused to cooperate.

“We cannot wait any longer to launch the CIO and reform the criminal justice system,” said Rep. Kang Hoon-sik, chief spokesman for the DP.

The ruling party cited Kim's expertise in the Constitution and Chang's experience as a human rights lawyer as reasons for their appointments to the nomination committee. A former head of the Gyeonggi Provincial Bar Association, Chang currently heads Suwon's Human Rights Commission.

According to the law governing the CIO, the nomination committee is supposed to have seven members, with the minister of justice, minister of National Court Administration and the president of the Korean Bar Association automatically included.

The ruling party is supposed to appoint two members and opposition parties with more than 20 lawmakers are to name the remaining two. The UFP is the only opposition party large enough to name committee members.

Six out of seven committee members must vote to nominate a candidate, effectively giving the opposition veto power.

“The UFP is insisting that the CIO is unconstitutional and refusing to cooperate,” Kang said. “Repeating unconvincing arguments is only delaying the reform of the prosecution. Refusing to participate in the nomination committee shows that the UFP is unwilling to reform the criminal justice system.”

Rep. Kim Tae-nyeon, floor leader of the DP, also said earlier in the morning that it is frustrating to see the “UFP’s dereliction of duty.”

As the UFP refuses to form the nomination committee, an ally of the DP said on Monday that it wants to take over the role.

Rep. Choe Kang-wook, chairman of the Open Minjoo Party, said the law should be revised so that minority opposition parties are awarded the power to appoint members of the nomination committee.

At the end of last year, the DP and its allies pushed through a series of bills to create the CIO, making it the first state organization permitted to take over some powers of the prosecution. The UFP boycotted the voting at the time, calling the bill an attempt to tame the state prosecution.

The law governing the CIO states that it will have jurisdiction over 6,500 senior officials, including the president and his or her immediate relatives; senior presidential aides; the National Assembly speaker and lawmakers; the Supreme Court chief justice and judges; the Constitutional Court chief justice and judges; the prime minister, ministers and vice ministers; the prosecutor general and prosecutors; mayors, governors and education office chiefs; and senior police and military officers.

The agency has the power to indict Supreme Court justices, the prosecutor general, judges, prosecutors and police officials, precluding the prosecution from being able to protect its own members from criminal charges.

The head of the new agency will serve a three-year term. The appointment does not require the legislature’s approval, although a confirmation hearing will take place.