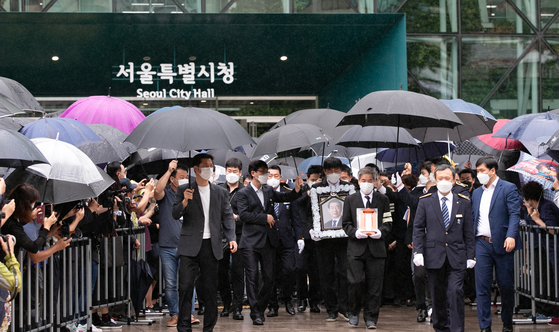 A mortuary tablet and portrait of late Seoul Mayor Park Won-soon leave Seoul City Hall on Monday morning after a funeral service was held inside the government office building. [NEWS1]

A funeral service for Seoul Mayor Park Won-soon was held Monday morning at Seoul City Hall as politicians, social activists, friends and family gathered to eulogize the late mayor, three days after he was found dead on a mountain after committing suicide.

The Seoul Metropolitan Government said in a statement that only 100 people were allowed to attend the funeral, held on the eighth floor of Seoul City Hall in Jung District, central Seoul, to prevent the possible spread of the coronavirus.

Livestreaming was available on various online platforms run by the Seoul Metropolitan Government, which attracted some 35,000 viewers.

“I’ve experienced many unexpected events in my life, but never did I imagine I’d be the head of your funeral committee,” Paik Nak-chung, professor emeritus of English literature at Seoul National University, said in his eulogy Monday, addressing the late mayor.

“The reason why so many Seoul citizens, the general public of this country and figures from foreign nations can’t hide their shock and grief over your death is because you were a special person and because you had practiced good deeds,” Paik continued.

Lee Hae-chan, chairman of the ruling Democratic Party and a long-time friend of Park, said he was “deeply saddened and hurt” by the loss of his companion of 40 years.

“You’ve done so much as a human rights lawyer, an activist and the mayor of Seoul,” Lee recalled. “Your last road is so sad and hurtful because you were that much of a passionate, pure and shy person.”

Park’s daughter, Da-in, said her father was devoted to the Korean capital.

“Every citizen was precious for my dad. He was a mayor who always listened to the voices of citizens and followed their decisions,” the daughter said. “I’m sure that my father, as the eternal [Seoul] mayor, will protect us from a place we can’t see, like he always had.”

Park’s coffin left Seoul National University Hospital in Jongno District, central Seoul, at around 7:10 a.m. Monday to arrive at Seoul City Hall for the funeral. A mourning altar had been set up at the hospital since Friday, hours after police found him dead on Mount Bukak, near his residence.

At 7:40 a.m., the coffin carrying Park arrived at Seoul City Hall, where supporters had been waiting outside in the pouring rain to bid their final goodbyes.

After the funeral, the coffin was taken to the Seoul Memorial Park in Seocho District, southern Seoul, where the cremation began shortly before 11 a.m. At around 1 p.m., his family traveled to Changnyeong County, South Gyeongsang, to bury his ashes.

Park was born in Changnyeong in 1956 and died at the age of 64 last week. He was the longest-serving Seoul mayor ever.

The mayor’s death came just a day after a former secretary filed a criminal complaint with the police alleging she had been sexually harassed by Park on numerous occasions for over four years. Park, a self-proclaimed feminist, never publicly commented on the accusations.