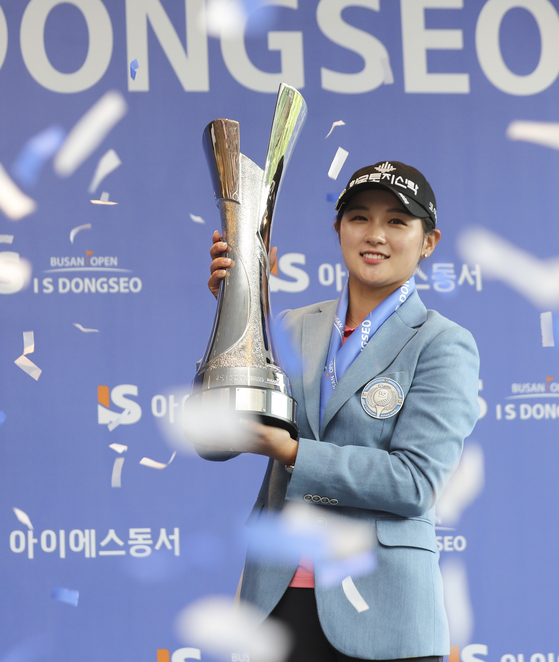 Park Hyun-kyung poses for a photo after winning the inaugural IS Dongseo Busan Open at Stone Gate Country Club in Gijang, Busan, on Monday. [YONHAP]


GIJANG, Busan — As the downpours continued on Monday, Park Hyun-kyung slogged her way through to a very wet title at the KLPGA Tour's inaugural IS Dongseo Busan Open at Stone Gate Country Club in Gijang, Busan.

After canceling the entire first round on Friday due to heavy rain, the tournament originally announced that it would try to finish a complete 54-hole tournament with an extra final round added on Monday. This decision — which wasn't strictly necessary because the KLPGA Tour does allow 36-hole tournaments — meant the tournament days would have been skewed one day forward, to Saturday, Sunday and Monday.

But the heavy rain didn't stop, and after playing in difficult weather on Saturday and Sunday, the tournament finally pulled the plug on the final round on Monday. Due to this, only the two players — Lim Hee-jeong and Park Hyun-kyung — tied for first had to play.

Tied at 13 under par, 131, the two players played three holes, from the par-4 16th to the par-4 18th, and the player with the lower score after the three holes was determined the inaugural champion.

Heading into the last of the three-hole playoff with the score tied at par, both Lim and Park made pars again, so they finished the three play-off holes with a score of even. Due to this, they headed to a sudden-death playoff on the par-4 18th.

On their first sudden-death playoff hole, the 18th hole again, Park made the first move by making a birdie. Right when everyone thought it was Park’s time to win, Lim quickly responded by making her birdie putt.

Then it finally came down to their second sudden-death playoff hole.

Despite Park hitting her tee shot shorter than Lim, she stuck her second shot to the pin whereas Lim left herself a long birdie putt.

As Lim missed her birdie putt and Park made hers, Park became the first multi-winner on the KLPGA Tour this season.

“I still can’t believe that I was able to achieve my goal of picking up another win this quickly,” Park said. “Since this win was made in such bad conditions, I feel happier and it is more meaningful.”

Park made her debut on the KLPGA Tour along with Lim last season, but she didn’t stand out as she didn’t pick up a single win last year, while Lim picked up three. However, this season, it seems to be the year for Park. Not only did Park pick up her first-ever win at a major, she picked up her second shortly after it on Monday, becoming the inaugural champion.

Since her victory at a major, Park did struggle, missing the cut at one event and struggling to make top-10 finishes.

“I think this tournament allowed me to gain some confidence,” Park said, “and that’s why I think it’s more meaningful.”

Aside from Park’s victory, world No. 10 Lee Jeong-eun also received a lot of attention for making a rare albatross during the first round of the tournament on Saturday.

Despite the albatross, Lee didn’t have the best tournament as she struggled during the second round and finished the tournament tied for 63rd at one under par, 143.

Looking at the final standings, world No. 6 Kim Sei-young finished the tournament tied for sixth, with a two-day total of seven under par, 137, while Lim once again had to walk away with a runner-up finish.

The KLPGA Tour will take a short two-week break and resume its season at the Jeju Samdasoo Masters at Saint Four Golf & Resort, from July 30 to Aug. 2.