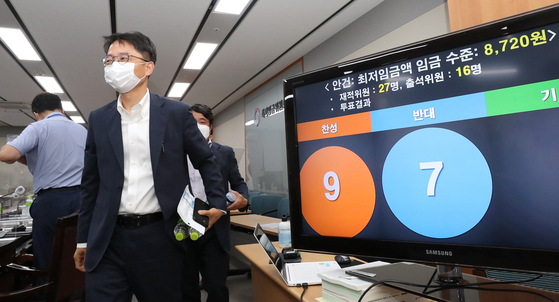 Some labor representatives to the group charged with setting the rate walked out in disgust, and no one from the labor side even voted, while some business owners were equally dissatisfied, as they said they can barely pay wages as it is.

The Minimum Wage Commission established to determine the rate came to its conclusion Tuesday after failing to reach an agreement eight times since June 11. It set the rate at 8,720 won an hour.

The minimum wage system was first established in 1988, and the annual increase has always been higher. Even in 1999, in the wake of the Asian financial crisis, the rate was increased by 2.7 percent.

The 2021 increase amounts to a virtual freeze in wages.

Including regular bonuses and welfare payments, Tuesday’s decision will bring the actual minimum wage in Korea to 10,474 won. The minimum monthly wage will be around 1.8 million won, and the annual total around 22 million won. This does not include additional allowances or performance-based incentives. Around 930,000 to 4.1 million people will be affected by the change, according to the Minimum Wage Commission.

Labor representatives had proposed a minimum wage increase of 16.4 percent, to 10,000 won, claiming that their suggested amount is the bare minimum for single households to maintain a decent existence. The 10,000 won level was also a campaign pledge by President Moon Jae-in.

Conflicts were especially heated during the sixth and seventh rounds of negotiations, when all nine labor representatives walked out after the corporate members said they were firm on a cut.

Corporate representatives initially requested a cut of 2.1 percent, to alleviate economic difficulties from the coronavirus. Government representatives previously suggested an increase of 0.3 percent to 6.1 percent.

"We added the 0.1 percent for the economic growth forecast, 0.4 percent for the inflation forecast and the 1 percent needed to improve the lives of workers and came up with the 1.5 percent amount. Growing difficulties and uncertainties in the economy were the No. 1 reason why we made such a decision," explained Kwon Soon-won, a professor of Sukmyung University and a member of the committee representing the government.

"Having a job is the most important source of earnings. We believe there is more loss than gains when the minimum wage increases beyond expectations and jobs are lost," she added.

The wage approved by the council will be submitted to the minister of Labor and Employment, which has until Aug. 5 to make it official. Labor or business can raise objections, and if the labor minister accepts them, the wage decision can be kicked back to the council for review.

Officials from the Korean Confederation of Trade Unions stage a demonstration in front of the Labor Ministry in Sejong on July 13. [YONHAP]


Labor immediately expressed frustration. The Federation of Korean Trade Unions labeled Tuesday’s decision a “disgrace” in its official statement, saying it is “devastated beyond words” to see government representatives come up with “the worst increase in the history” of minimum wage talks.

The Korea Federation of Micro Enterprise and Korea Federation of Small and Medium Business said while they are “not satisfied” with the decision, they will accept it. However, the two urged the government to come up with measures to secure jobs, including an increase in funds to stabilize employment.

The two groups have argued for either a cut or a freeze in the minimum wage.

Convenience store owners from the Korea Franchise Union issued a statement Tuesday that they will not accept the amount. The group said that an increase in the minimum wage is “pushing business owners over the edge.” It requested the government abolish the current system and set separate minimum wages for each industry.

While Tuesday’s decision may have put the brakes on the rapidly increasing minimum wage, experts say it may not be enough to ease the labor cost burden. Korea’s minimum wage has increased rapidly, by 16.4 percent in 2018 and 10.9 percent in 2019.

Many business owners are having trouble paying their workers even the minimum wage, laying off staff and temporarily closing businesses, and they are squeezed by a drop in business and increased costs. The number of business owners that hired at least one employee dropped on year by 200,000 in May, according to the National Statistics Agency, a sign that the number of jobs is decreasing.

“Due to the coronavirus, the minimum wage shock that hit the economy in 2018 is likely to continue on for some time,” said Choi In, an economics professor at Sugang University.

“Since Korea applies the same minimum wage regardless of location or industry, the burden will continue on especially to those working in industries and at locations that are vulnerable to changes in the minimum wage,” said Sung Tae-yoon, an economics professor at Yonsei University.