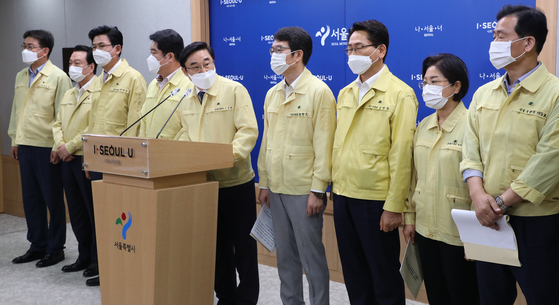 Several district chiefs in Seoul gather in the Seoul Metropolitan Government’s briefing room in Jung District, central Seoul, Tuesday, to vow to push through their districts' initiatives regardless of the recent death of Seoul Mayor Park Won-soon. [YONHAP]

An official from the Seoul city government said Tuesday that the office could investigate the sexual harassment allegations raised by a former secretary of Seoul Mayor Park Won-soon if she formally asks for an internal probe — but steadfastly denied knowing anything about the accusations against the late mayor, who committed suicide last week.

The remark from the official came a day after several women’s rights activists representing Park’s former secretary urged the local government and police to be serious about the allegations and get to the bottom of the case, saying the mayor’s suicide shouldn’t be an excuse to sweep it under the rug.

The secretary filed a complaint against Park with the Seoul Metropolitan Police Agency on July 8, a day before the mayor was reported missing by his daughter. About seven hours after the daughter’s call, at 12:01 a.m. on July 10, Park was found dead on Mount Bukak in Seoul, near his residence.

Police determined it to be suicide and said they would close the nascent sexual harassment case due to Park's death, as there was nobody to indict. Park made no mention of the allegations in a suicide note left in his home.

The former secretary’s lawyer claimed Monday that the Seoul Metropolitan Government was aware the victim was in pain earlier because she had described her encounters with Park to colleagues and asked for help. The office, however, did nothing to save her from the sexual harassment, the lawyer said, which included sending the former secretary photos of him in his undergarments, beckoning her to a bed inside a room in his office and asking her to hug him.

Multiple Seoul government officials denied knowing about these accounts Tuesday, saying they’d never heard about the allegations or received any formal complaint from the secretary.

An official in the Seoul government’s Women & Family Policy Affairs Office told the JoongAng Ilbo Tuesday that the team received no formal request from the victim for help, and that if she ever decides to ask for an official investigation, the city government would form an investigative committee comprising “internal and external experts.”

The official continued saying there were no records in the city government’s Women’s Rights Division or Human Rights Division that she called or submitted any kind of document asking for help.

Another former secretary of Park who spoke on the condition of anonymity told the JoongAng Ilbo that she had no knowledge of her colleague’s alleged ordeal.

While Seoul police have yet to announce any plans to reopen the sexual harassment case, officers probing the death of the late mayor said Tuesday they would try to recover digital evidence from Park’s mobile phone through forensic procedures to verify his motive for committing suicide. Police made clear, however, the process wasn’t intended to search for conversation logs shared between Park and his secretary.

In its first statement about the sexual allegations, the Seoul government’s labor union said Tuesday that Park’s closest aides should come clean about whether they knew about the accusations, saying they shared the blame either way. The union said if the aides didn’t know, they were “too negligent” in their work, and if they did know but turned a blind eye, their responsibility should be “heavily weighed.”

Twenty-seven “special administrative service” officials in the Seoul Metropolitan Government, mostly secretaries and advisors to Park, were automatically dismissed from the government office last Friday following his death, as per a domestic law that states their work contracts expire when their local government office chief leaves the office.