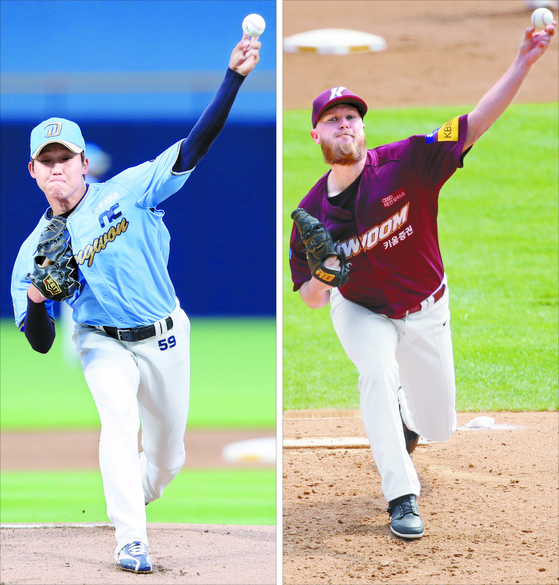 Koo Chang-mo of the NC Dinos, left, and Eric Jokisch of the Kiwoom Heroes both throw pitches during KBO games this season. [YONHAP]

This season, two unexpected names in the KBO are competing for the ERA title.

Last season, the ERA race was firmly between Josh Lindblom, formerly of the Doosan Bears, and Yang Hyeon-jong of the Kia Tigers. The two both dominated throughout the season, waiting until the very last game to determine the winner. As the two pitchers' ERA was very close, Yang had to wait until the Bears' last game, when Lindblom started, to find out the winner. In the end, it was Yang who claimed the title.

This season, the Kiwoom Heroes’ Eric Jokisch and NC Dinos’ Koo Chang-mo are locked in competition. As of Monday’s game, they are the only two pitchers in the league with an ERA below 2.00.

Jokisch is ranked first with a 1.41 ERA while Koo is close behind with a 1.48 ERA. Although Dinos foreign pitcher Drew Rucinski is having another strong season ranking third at 2.24, but he is a little off to be competing for the title against Jokisch and Koo.

Even at this stage in the early days of the season, an ERA below 2.00 is impressive.

The last time the KBO saw a starter finish the season with an ERA below 2.00 was Ryu Hyun-jin back in 2010, when he played for the Hanwha Eagles. In 2010, Ryu finished his season with a 1.82 ERA after 25 starts. That season, Ryu picked up 16 wins and four losses.

A sub-2.00 season is almost definitely going to be the best of their career. Finishing an entire season with so few runs earned leaves barely any margin for error. Essentially, a starting pitcher needs to be playing almost as close to perfect as possible to get the entire six-month season.

Koo seems to have taken that quest to perfection to heart. Throughout Koo's first nine games of the season, he managed to maintain an impressive 0.82 ERA.

Thankfully, giving up only one run throughout seven innings during a game against the SK Wyverns on July 7 allowed Koo’s ERA to drop down to 1.38.

Looking at Koo’s recent performance, he’s been shaky. During a game against the LG Twins on July 12, Koo gave up two runs throughout two innings. If the game had continued, his ERA would have jumped up to 1.68. Luckily for Koo, the game was ultimately rained off.

Despite his inconsistency in recent games, this season already looks like the best of Koo's career. Having made his KBO debut for the Dinos in 2016, he’s always been the club's starter, but it wasn’t until last season that he started to show his potential. In the 2019 season, Koo picked up 10 wins, seven losses and one hold with an ERA of 3.20 in 23 starts.

While Koo struggled, Jokisch continued to shine on the mound. Tossing eight scoreless innings against the Kia Tigers on June 27, he managed to drop his ERA to 1.42. Then, with another scoreless game against the Wiz on July 3, Jokisch dropped his ERA once again to 1.30. Only the game against the Samsung Lions on July 9 prevented him from getting his ERA even lower. By giving up two runs throughout seven innings, Jokisch’s ERA now stands at 1.41.

This is Jokisch’s second season in the KBO, and he hasn’t disappointed. In his first season, he helped the Heroes advance to the Korean Series by picking up 13 wins and nine losses with a 3.13 ERA in 30 starts throughout the regular season. Although the Heroes lost the title to the Bears, Jokisch successfully fulfilled his role as the first starter in the Heroes rotation.

ERA may already look like a two-horse race, but the wins title is still open. As of Monday’s game, Raul Alcantara of the Doosan Bears, Jokisch and Koo are all tied for the lead at eight wins. Since those three pitchers all play for the top teams in the league, they tend to have a higher winning percentage.

Koo leads in another awards category — strikeouts. Koo is the current leader at 82, four ahead of Dan Straily of the Giants. Jokisch may be leading in ERA, but he falls way back in strikeouts, at 14.

There is a possibility that the two starters could face each other this week as the Heroes and the Dinos are playing a three-game series starting Tuesday.