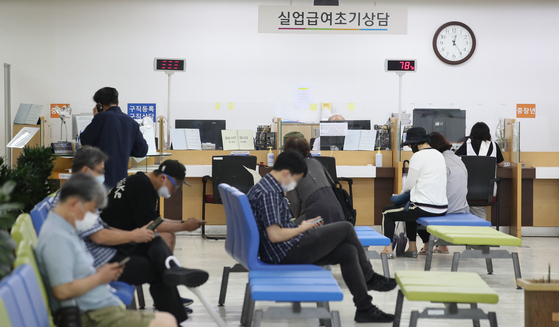 People wait to apply for unemployment benefits at a center in Jung District, central Seoul, on Monday. [YONHAP]


For the fourth consecutive month, the number of employed people shrank, the longest stretch in more than a decade.

As the coronavirus crisis continued to hurt the economy, jobs in manufacturing and restaurants and hotels particularly suffered.

The only demographic group that seemed immune were people aged 60 or older.

According to Statistics Korea on Wednesday, the number of people employed in June was 27 million. That’s 352,000 fewer than a year ago.

The number of people employed has been declining since the surge in coronavirus cases in March.

The last time jobs shrunk for this long a period was during the global economic meltdown between October 2009 and January 2010.

The area hurt the most was manufacturing, which lost 65,000 jobs in June compared to a year earlier, a 1.5 percent decline. Manufacturing industries have been losing jobs since March, and the numbers have mounted.

The services sector has also been hit heavily.

The restaurant and lodging industry lost 186,000 jobs in June, a 7.9 percent decline.

The education services industry lost 89,000 jobs, a 4.6 percent drop, after cases of the coronavirus were detected at hagwon, or cram schools.

The only area that saw an increase was social health and welfare, which added 164,000 jobs, a 7.6 percent increase.

Many of the jobs in social health and welfare go to senior citizens.

Seniors aged 60 or older were the only age group that saw an increase in jobs in June. Some 338,000 jobs were added, a 6.9 percent increase.

The report has highlighted the vulnerability of certain kinds of workers.


This is in stark contrast to the situation for regular salaried employees, where jobs grew 349,000 or 2.5 percent.

The number of unemployed people remained above 1 million for the sixth consecutive month.

On Monday, the Employment Ministry said unemployment payments in June again broke the record for the fifth consecutive month.

In June the government handed out 1.1 trillion won ($914 million) in unemployment benefits, a 63 percent surge compared to a year ago.

In May, unemployment benefits exceeded 1 trillion won for the first time.

The number of recipients reached an all-time record in June, 711,000.

The number of people newly applying for unemployment benefits increased 40 percent in June from a year ago, reaching 106,000.

“Once again my heart is heavy with news that there are still many people facing difficulty in finding jobs,” Finance Minster Hong Nam-ki posted on Facebook.

Yet Hong said the latest report showed that job losses were better than in April.

“While the employment situation is still difficult, there are indications of employment recovery,” Hong said.

The government on Monday announced a Korean New Deal meant to create 1.9 million jobs in the next five years by investing a total of 160 trillion won — 70 percent by the government — while also expanding the social safety net.

Meanwhile some have questioned the wisdom of such aggressive spending.

The government this year created three supplementary budgets totaling 59 trillion won at a time when taxes are shrinking.

Tax collections in the first five months of the year were 15 percent smaller, or 21.3 trillion won less, than a year earlier. Spending increased 10 percent year-on-year, or by 24.5 trillion won.