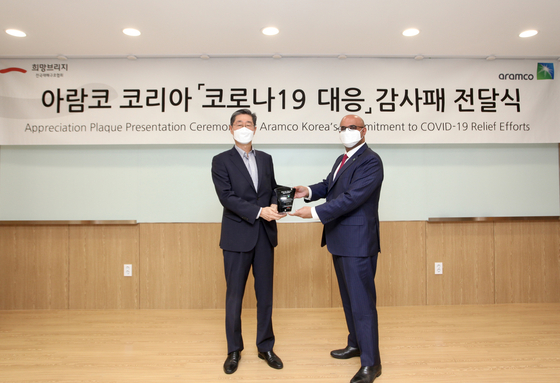 Aramco Korea was recognized by the Hope Bridge Korea Disaster Relief Association (Hope Bridge) for its contribution of 1 billion won ($832,000) to help curb the spread of Covid-19 in the country.

The March 2020 donation has been utilized for a range of relief efforts undertaken by Hope Bridge, including support for frontline medical workers providing emergency food vouchers to affected individuals and distributing hand-sanitizing wipes and hand sanitizers to facilities in need.

“In the face of an unprecedented disruption caused by Covid-19 in Korea and around the globe, we are proud to stand together with Korea to face the challenge with a strong and united approach through the partnership with Hope Bridge,” said Fahad A. Al-Sahali, Aramco Korea’s representative director.

Aramco Korea is a fully-owned subsidiary of Aramco, which has contributed $6.7 million to support healthcare and disaster relief organizations around the globe. The company is also the controlling shareholder of S-Oil, with a 63.41 percent stake, and owns 17 percent of Hyundai Oilbank.