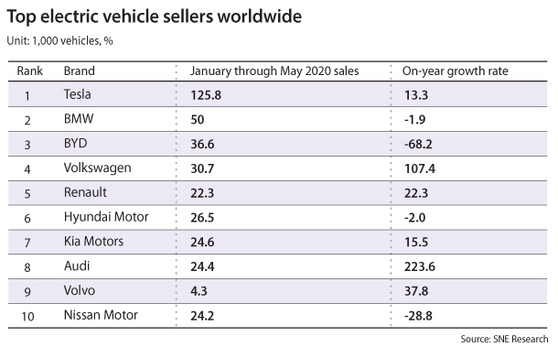 Hyundai and Kia Motors both ranked within the top 10 electric vehicle makers in the world by sales volume between January and May 2020, according to SNE Research.

The entire vehicle market has retreated due to the Covid-19 pandemic. Global electric and plug-in hybrid vehicle sales between January and May plummeted 20.3 percent on year. A total of 710,100 such vehicles were registered during this period, while last year, the figure was 891,400.

According to SNE Research, the two Korean companies’ sales were less effected than their global competitors.

Hyundai's sales dropped slightly during the same period by 2 percent on-year, after sales declines in Europe had pulled down performance. Kia, on the other hand, sold 15.5 percent more on year, jumping from last year’s 14th place to seventh this year. Its plug-in hybrids, Ceed and XCeed, sold well.

Driven by Model 3’s popularity, Tesla rose to first place, with electric vehicle sales having increased 13.3 percent on year. Its market share jumped from 12.5 percent last year to 17.7 percent, becoming the only company to see double-digit figures. Last year’s top player, China’s BYD, was pushed down to third place, with its market share dropping to 5.2 percent from 12.9 percent in 2019.

Monthly figures for May showed that the electric vehicle market is going through hard times, as major markets in the United States, Europe and China all struggle to emerge from a pandemic-caused recession, the research firm said.