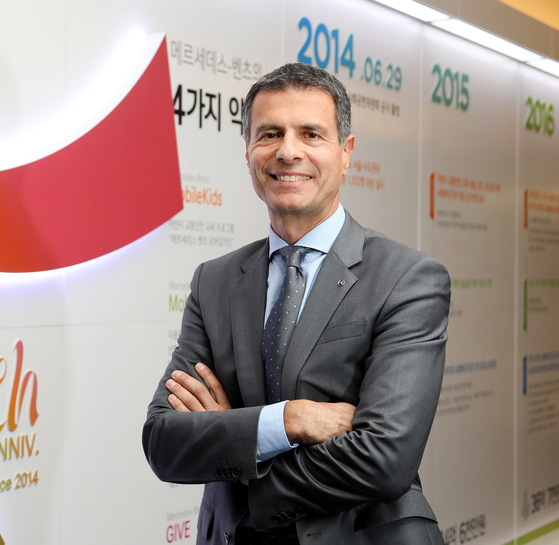 Dimitris Psillakis, CEO and president of Mercedes-Benz Korea, is leaving his post soon to take up a new position, with the company in good stead, as the No. 1 import brand, but also under investigation for fabricating emissions data.

The soon-to-be former CEO in an email interview with the Korea JoongAng Daily said that Korea’s electric vehicle (EV) market has just started to pick up, and added that his company is about to bring two plug-in hybrid SUVs, the GLC Coupe and GLE Coupe, this year.

The brand currently sells plug-in hybrid versions of three sedans and one SUV — C, E, S Class cars and the GLC SUV — and one fully-electric vehicle, the EQC SUV.

“We believe now is the time that the full electric vehicle market picks up [in Korea],” wrote Psillakis.

Psillakis, who has served as the CEO of the German brand’s Korean unit since September 2015, was recently appointed to lead the company’s Canadian unit. His term there will start from Sept. 1.

Psillakis was supposed to transfer to lead the sales and product management team at Mercedes-Benz U.S., but the plan fell out due to visa problems related the to the coronavirus, according to the carmaker. The United States has suspended the issuing of certain categories of work visas.

Mercedes-Benz has been the No. 1 player for four consecutive years since 2016. Last year, it achieved a sales record, moving 78,133 vehicles off the lot.

Until 2015, it was in the No. 2 spot in the country’s import car market, outperformed by rival BMW. The annual sales gap neared 10,000 units a year at one point. Last year, Benz’s sales exceeded BMW’s by more than 30,000 units.

Psillakis said he has led the company under the philosophy “Good People, Good Product and Good Strategy.”

“My utmost goal as the president and CEO of the company was to consistently provide the best services to enhance customer satisfaction,” he said.

One way of achieving that was to offer various vehicles so that a wide range of customers can find a model that suits them.

“Our ever-diversifying portfolio caters to more female customers and younger generations who are looking for design and style,” he said. They offer a broad range, “from compacts to sedans, SUVs, coupes and cabriolets.”

As the brand continued to grow in Korea, Psillakis said giving back to the society was essential in keeping the customers loyal.

He said the Mercedes-Benz CSR Committee, which was formed in 2014, donated a total of 4.5 billion won ($3.7 million) last year.

Psillakis said he was especially proud of the participatory donation program called “Mercedes-Benz GIVE,” where running or bike races were held and the entry fee was donated to various nonprofit organizations.

Last year, the brand held its fourth marathon, in which some 20,000 people participated, and donated a total of 920 million won. This year, the brand will host the event in a non-contact way, so participants can run on their own rather than at a single event.

“I think this is meaningful because we are engaging with the public,” he said. Psillakis ran in all Mercedes marathons during his term.

The leadership of the Korean unit will soon be handed over to Bjorn Hauber, currently serving as head of Mercedes-Benz’s operations in Sweden and Denmark.

Mercedes-Benz Korea is currently under investigation by the Korean prosecutors for fabricating emission data of its diesel vehicles sold from 2012 to 2018. The brand was fined with 77.6 billion won by the Ministry of Environment in May, the largest amount for an import carmaker. Mercedes-Benz Korea said it will respond in court.

Psillakis said he “does not wish to disappoint Korean customers” and said he will actively cooperate with local authorities if necessary in the future.