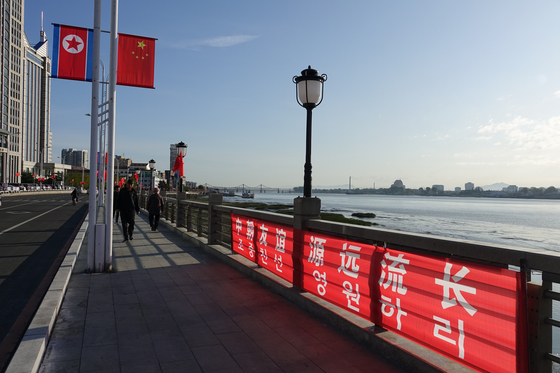 
North Korea on Wednesday slammed U.S. Secretary of State Mike Pompeo for his public criticism of China, making clear Pyongyang is on the side of its neighbor and closest ally as the rift between Beijing and Washington grows.

In an English-language statement carried by the Korean Central News Agency (KCNA), the North’s Foreign Ministry said Pompeo made “reckless remarks” by condemning China for the latter’s sovereignty claims to the South China Sea — an issue that has raised tensions between China and its maritime neighbors in one of the world’s busiest bodies of water.

“It is an extremely sinister act that a non-Asian country across the ocean, not being content with its reckless remarks over the issue of the South China Sea, has hurled abuses at the CPC [Communist Party of China], linking the issue with the latter,” read the statement.

“Pompeo is outrageously deriding the CPC in such a way as to label the Chinese media as ‘propaganda bodies of CPC’, Covid-19 as a ‘crisis caused by CPC’ and 5G telecommunication business as a ‘tool of CPC.’”

The statement came in response to Pompeo’s announcement on Monday that the United States formally rejected most of Beijing’s claims in the South China Sea, and that it would stand with U.S. allies and partners in Southeast Asia to protect their sovereign rights to offshore resources.

The North’s Foreign Ministry went on to argue in the statement that Pompeo’s reasons for his “unbridled criticism” of China was meant to “sully the trust of the Chinese people in the CPC,” to “tarnish the international prestige of the CPC” and “to overpower China with continued harassment from inside and outside.”

But “no matter how maliciously Pompeo slanders the CPC,” the criticisms “will only serve to highlight the invincibility of the CPC and the superiority of the socialist system,” the statement said.

This is not the first time Pyongyang has released an official statement publicly taking sides with the Chinese government in its faceoff with Washington.

Last August, amid intense pro-democracy protests in Hong Kong, the North’s Foreign Ministry said it “fully supported” the measures of the CPC to defend China’s sovereignty over Hong Kong while accusing “foreign forces” of attempting to meddle in China’s internal affairs — echoing the official rhetoric Beijing used to condemn the demonstrations.

This support for China on the Hong Kong issue was again asserted last month by North Korea’s Foreign Minister Ri Son-kwon to China’s ambassador in North Korea Li Jinjun. North Korea also signed a letter last year along with 36 other countries backing China’s detention of Uighurs in its western province of Xinjiang.

This string of statements and actions stand out, as North Korea rarely issues official commentaries on global affairs not directly involving itself.

The move is largely believed to be an attempt to cozy up to Beijing, which recently supplied the North with food aid amid the country’s continuing food insecurity, as the likelihood of a diplomatic settlement with the United States grows increasingly dim. China is North Korea's closest economic partner by an immense margin, and also shares a military alliance dating back to when Beijing aided the North during the 1950-53 Korean War.