Despite the dire housing shortage in Seoul and a brewing property bubble, 150 square kilometers (58 square miles) sits virtually empty within the city. The government has its eye on these areas and is hoping to develop the land.

One hitch: the verdant swathes are currently greenbelt. Greenbelt zones are protected areas where building is not permitted in order to bring open spaces to city centers.

The government is “open to the possibility of lifting the restrictions on greenbelt zones following a review, if necessary,” Finance Minister Hong Nam-ki said Tuesday.

Greenbelt conversion has frequently been seen as a way to address the country’s housing-supply shortage, but the Seoul Metropolitan Government has been against the idea, saying greenbelt-designated areas are supposed to be exempt from development in order to preserve and protect the natural environment.

According to the Ministry of Land, Infrastructure and Transport, there are 3,837 square kilometers of greenbelt zones total in Korea as of December 2019, about 4 percent of the entire country.

Korea’s greenbelt areas are divided into five grades, with first-level zones most valuable in terms of the environment. Third- to fifth-level greenbelt zones are the regions that have already been degraded. 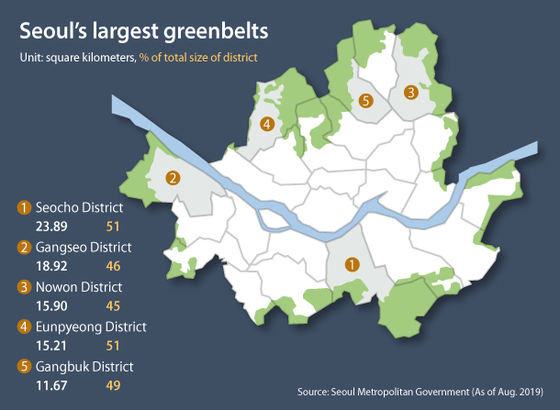 Seoul has about 150 square kilometers of greenbelt, or about 25 percent of the total in the country, including a 23-square-kilometer zone in Seocho District, southern Seoul. Seocho is about half greenbelt.

Gangseo District in western Seoul is home to an 18-square-kilometer greenbelt zone, which is 46 percent of the entire district. The Naegok-dong area of Seocho and Gimpo International Airport area of Gangseo are the best possibilities for development. 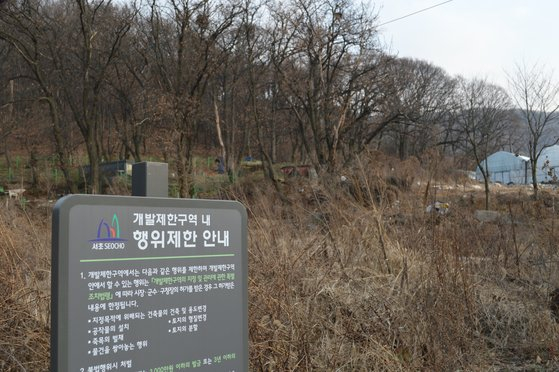 
“The Seocho and Gangnam District will be the best options for government as they are convenient for transportation, as well as basic amenities,” Choi Sun-ung, CEO of Korea Substitute Land Development, said. “The Eunpyeong, Gangbuk and Dobong areas have too many mountains nearby.”

Some experts say opening up the greenbelt zones will not help solve the country’s housing supply shortage.

“It is impossible to design a new town in Gangnam District when all the government’s real estate regulations are currently targeting the district,” one property developer said.

In 2009, when the Lee Myung-bak administration allowed for development in the greenbelt zones of Seocho and Gangnam, the prices of apartments there were about half of the other same-sized apartments in those districts.

At the time, an 84-square-meter flat in Prugio Apartments in Segok-dong, Gangnam District, cost about 340 million won ($280,000), which was about 60 percent cheaper than other same-sized apartments. Demand for the apartments was high, resulting in a rise of jeonse, or long-term housing rental deposit, prices.

Want to buy a new car? Get ready for a wait.