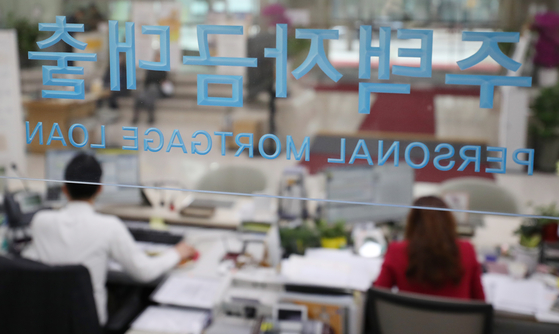 The mortgage loan window at a commercial bank in Seoul. [YONHAP]


For the first time, mortgage loans offering an annual interest rate below 2 percent have surfaced two months after the Korean central bank dropped the nation’s key interest rates to a historic low in the face of the coronavirus pandemic.

According to the Korea Federation of Banks, the Cofix (cost of fund index), a benchmark rate used in setting mortgage loans’ floating interest rates, has fallen below 1 percent.

The Cofix’s new mortgage-backed loans rate for June dropped to 0.89 percent, a 0.17 percentage point drop from May. This is the first time Cofix has fallen below 1 percent since it was first adopted in 2010.

The rate for outstanding loans was 1.18 percent, 0.08 percentage points lower than in May.

Due to the changes, the floating rate on commercial banks’ mortgage loans as of Thursday has been lowered.

The interest rate Cofix-linked fresh mortgage at NH Nonghyup Bank was between 2.13 and 3.74 percent. This rate is now lowered to 1.96 to 3.57 percent. For outstanding loans, interest rates have been adjusted from between 2.33 and 3.94 percent to between 2.25 and 3.86 percent.

“As the Cofix is calculated from the cost of the fund, if banks lower the interest on deposit and savings products, mortgage loans could be lowered further,” said a bank official.

Shinhan and Hana Bank, which bases its mortgage loans on financial bonds, are not affected by the changes on the Cofix. The interest rates at Shinhan are between 2.29 and 3.54 percent, while Hana is between 2.49 and 3.79 percent.

Mortgage loans with fixed interest are also not affected by the lowering of Cofix.

Cofix, used to price mortgages, at decade high of 3.4%