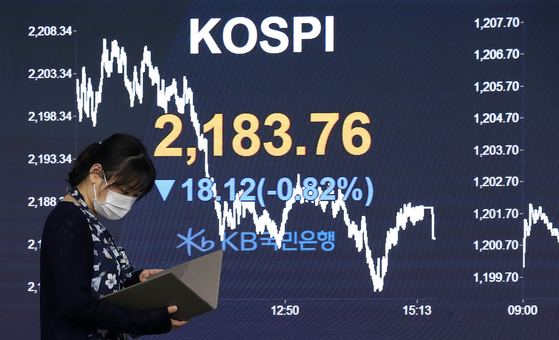 The final Kospi figure is displayed on a screen in a dealing room of KB Kookmin bank in the financial district of Yeouido, western Seoul, Thursday. [NEWS1]

The Kospi closed above the 2,200 level for the first time since Feb.19 in the previous session, largely on hopes for a coronavirus vaccine and economic recovery.

Bank of Korea Gov. Lee Ju-yeol said Korea's GDP growth this year is likely to be lower than the May forecast of a 0.2 percent contraction, saying that a recovery in consumption and exports will be slower than previously forecasted.

The Kospi trimmed some of the earlier losses on China's surprising 3.2 percent on-year hike in gross domestic product in the second quarter. The world's second-largest economy posted a 6.8 percent on-year drop in the first quarter.

The local currency closed at 1,205.6 won per dollar, down 5.10 won from the previous session's close.