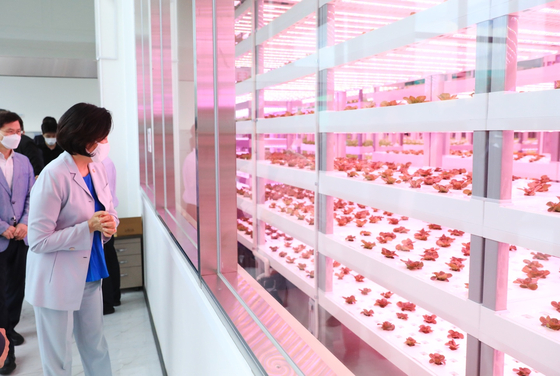 
In the era of digitization, agriculture must also evolve — so seems to be the view at Farm 8, an agricultural corporation that produces, processes and distributes salad vegetables in a 12-story apartment building in Pyeongtaek, Gyeonggi.

Purplish LED light surrounds the building's interior, as employees in protective clothing are seen transporting lettuce seedlings. All of the vegetables that Farm 8 produces are grown in this vertically structured farm, not in the ground.

The fruit and vegetable company founded in 2004 completed its expansion during the latter half of 2019, creating a 2,000 square-meter (0.5-acre) interior farm. According to Farm 8, the building keeps the temperature at 23 degrees Celsius (73 degrees Fahrenheit) and keeps out bugs, eliminating the need for pesticides. This style of farming is called smart farming.

Efficiency is key for Farm 8. Along with the vertical structure that makes the most out of the building's footprint, the company increases its productivity by using an automated system to adjust lighting, temperature, humidity and carbon dioxide levels to create a suitable climate for vegetables.

Using this method, Farm 8 produces 1.2 tons of vegetables daily. The company said it is the equivalent to the production at a conventional 100,000 square-meter greenhouse. That means that if one person eats 100 grams (3.5 ounces) of salad, the farm can feed 12,000 people a day.

These crops do not lack nutrition either. A recent assessment conducted with the Rural Development Administration showed Farm 8’s agricultural produce had an equal amount of nutrients compared to vegetables cultivated in a conventional setting.

Farm 8 said it is planning to adjust light and wind levels to cultivate vegetables with a higher concentration of specific nutrients. 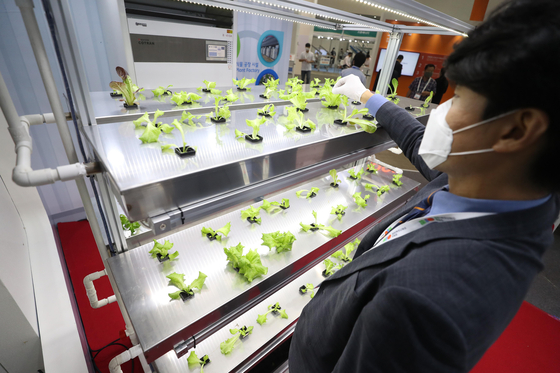 A visitor to the International Green Energy Expo & Conference in Daegu on Wednesday afternoon looks at smart farming equipment. [YONHAP]


The government has been closely monitoring smart farm corporations like Farm 8 as it looks to set precedents for the transition into the digital economy. The government projects the value of the smart farm market to grow up to 6 trillion won ($5 billion) in 2022 from 4.4 trillion won in 2017.

“In order to elevate smart farms, expansion in investment, establishment of automation equipment and a foray into the ‘untact’ market need to take place,” said Park. “The ministry will actively help smart farms gain investment by taking measures, such as creating a ‘Smart Korea’ fund.” 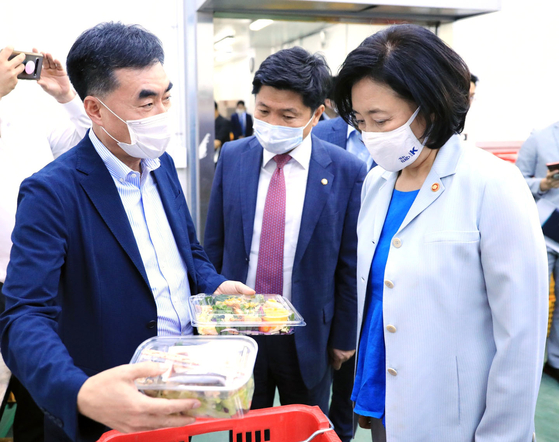 SMEs and Startups Minister Park Young-sun looks at samples of the salads that Farm 8 produces during her visit to its smart farm on Wednesday. [YONHAP]


The ministry has advertised the investment value of smart farms by mentioning a fund that raked in a 130 percent profit, among other funds related to agriculture and food.

Smart farms are on the rise around the world. MarketsandMarkets, a market research company based in India and the United States, projected that the value of the smart farm market at $12.5 billion by the end of this year, a 12.4 percent average yearly increase from 2018.

“When I was on a business trip to Sweden, I received a lot of inquiries regarding Korea’s smart farm technology,” said Park. “Countries without much sunlight need this technology, and we can target those places.”

Kim Soon-chul, the secretary general of the Korea Foundation for Cooperation of Large and Small Business, Rural Affairs, said the Kuwait Foundation for the Advancement of Sciences has expressed interest in adopting Korea’s smart farm technology and is currently in discussion with Korea.

“We are looking at it as an opportunity to break into the Middle Eastern market,” said Kim.

As fresh as can be