Korea’s Supreme Court on Thursday acquitted Gyeonggi Gov. Lee Jae-myung of an electoral law violation, overturning a lower court’s conviction that would have stripped him of office.

The acquittal was a relief to the embattled ruling Democratic Party, which in just two years has lost three local government chiefs as a result of sexual harassment scandals, including the suicide last week of Seoul Mayor Park Won-soon.

A majority of the 13-member court ruled Lee was not guilty of violating an electoral law by making a false claim during a televised debate before the Gyeonggi gubernatorial election in June 2018, returning the case to the Suwon High Court, which had fined him 3 million won ($2,500) last September. 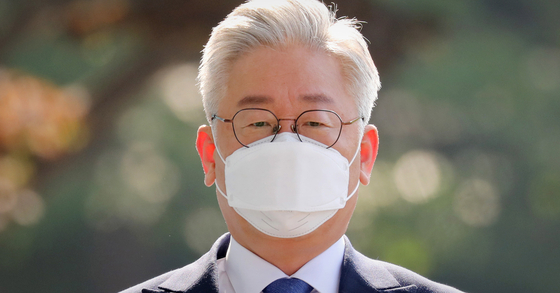 
Any elected official fined more than 1 million won for a crime must be removed from office, according to Korea’s electoral law.

The Supreme Court did not rule on three other acquittals from Lee's original trial: one count of abuse of power and two other electoral law violations. The Suwon High Court also acquitted him of those counts, meaning Lee has effectively been ruled innocent of all charges.

Lee’s sentencing was televised live at 2 p.m., the first time a ruling was made public in this way since former President Park Geun-hye was kicked out of office by the Constitutional Court in March 2016.