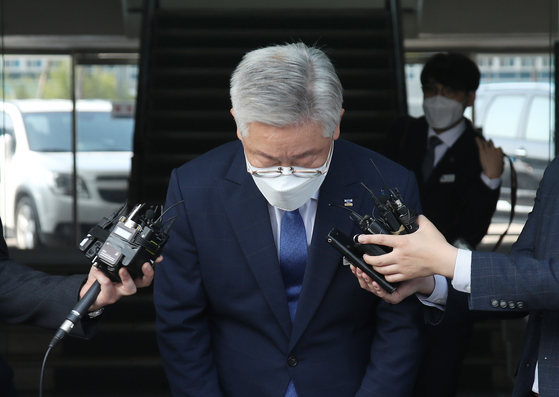 Gyeonggi Gov. Lee Jae-myung bows in gratitude to his supporters in front of the Gyeonggi Provincial Office in Suwon, Gyeonggi, on Thursday after the Supreme Court acquitted him of violating the election law, allowing him to remain in office. [YONHAP]


Korea’s Supreme Court on Thursday acquitted Gyeonggi Governor Lee Jae-myung of an electoral law violation, overturning a lower court’s conviction that would have stripped him of office.

The acquittal was a relief to the embattled ruling Democratic Party (DP), which in just two years has lost three local government chiefs as a result of sexual harassment scandals, including the suicide last week of Seoul Mayor Park Won-soon.

A majority of seven among the 13-member court ruled Lee was not guilty of violating an electoral law by making a false claim during a televised debate before the Gyeonggi gubernatorial election in June 2018, returning the case to the Suwon High Court, which had fined Lee 3 million won ($2,500) last September.

Any elected official fined more than 1 million won for a crime must be removed from office, according to Korea’s electoral law.

Prosecutors had charged Lee with violating Article 250 of the Public Official Election Act, which forbids the publication of false information during elections, by denying during the debate that he tried to force his older brother into a mental institute.

Most of the justices, however, agreed that while Lee may have been partially inaccurate or deliberately vague in the way he mounted a self-defense during the debate about his treatment of his brother, it was difficult to prove he had “actively” propagated lies about his actions in the context of his comments.

“Placing serious legal penalties on all sorts of inaccurate or undesirable expressions [made during public debates] for the sake of the fairness of elections cannot be a solution,” said Chief Justice Kim Myeong-su, who read aloud the court decision at Lee’s hearing at the Supreme Court in southern Seoul.

“If a state institution does not take into account realistic limitations of political debate and flatly seeks legal accountability for all political statements made in the process," he continued, "candidates [in the future] will find it increasingly difficult to engage in lively debate due to the fear of having to take legal responsibility afterwards.”


Kim also stressed that if a precedent was made out of claims made in a political debate, it could encourage politicians in the future to challenge the legitimacy of elections through litigation, thus endangering the principles behind democratic elections.

In the end, Lee’s acquittal was determined by a small margin of only two votes on the bench. Justice Park Sang-ok, who spoke on behalf of the minority of five justices who believed Lee was guilty, said Lee’s remarks during the debate denying his brother’s forced hospitalization “purposefully distorted the truth to the extent it could upset voters’ fair and accurate judgments.”

Lee was also originally indicted on an abuse of power charge for using his authority as mayor of Seongnam, Gyeonggi, in 2014 to commit his brother to a psychiatric institution against his will.

He also faced two more counts of making false claims, namely, denying in a televised debate ahead of local elections that he falsely impersonated a prosecutor, though he was eventually fined for this in 2004; and exaggerating the profitability of a development project as Seongnam mayor in 2010.

In May last year, the Seongnam branch of the Suwon District Court cleared Lee on all four charges.

State prosecutors appealed, however, leading to the Suwon High Court’s decision to convict him on the false campaign claim about his brother in September. He was cleared of the other three charges.

The Supreme Court on Thursday did not rule on three other acquittals from Lee's original trial.

Lee’s acquittal was televised live at 2 p.m., the first time a ruling was made public in this way since former President Park Geun-hye was kicked out of office by the Constitutional Court in March 2017.

An elated Lee delivered his response in front of the Gyeonggi Provincial Office in Suwon Thursday afternoon, thanking the Supreme Court for “handing down a reasonable decision based on objective truths.” On Facebook, the governor expressed gratitude to his supporters, saying the court ruling helped renew his faith in justice.

Releasing him from the risk of losing his governorship — which would have been fatal for his political career — the Supreme Court decision effectively catapulted Lee into the position of a major contender to succeed incumbent President Moon Jae-in in 2022.

Praised for his quick and decisive response to the coronavirus epidemic in his province, where his approval rating hovers in the low 70s, Lee is expected to mount a fierce challenge to the DP’s current frontrunner in presidential polling, former Prime Minister Lee Nak-yon.

But all is not well for the ruling party, as shown by tumbling public support for the administration in the wake of the Seoul mayor’s suicide last week and the sexual harassment allegations against him.

A more pressing concern for the party may be how to rehabilitate its image ahead of by-elections next April, when the country will elect new mayors for Seoul and Busan.