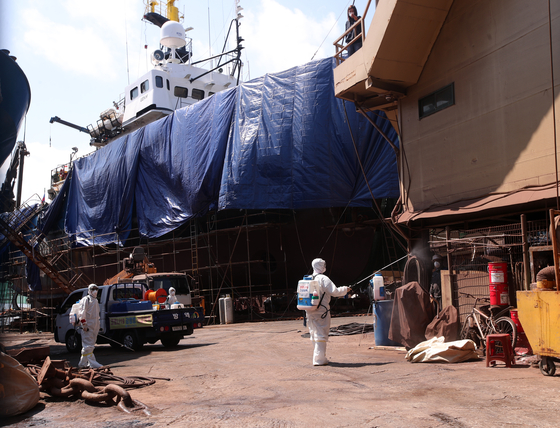 Busan quarantine officials on Thursday disinfect the surroundings of a Russian-flagged ship, where 17 Covid-19 infections were found on board. [YONHAP]

Twenty Korean construction workers who recently returned from Iraq have been diagnosed with the coronavirus Wednesday, local health officials said, as imported cases continue to rise.

The group was among 47 imported cases tallied across Korea on Wednesday alone, the sharpest increase since March 24, when 51 imported cases were counted, data from the Korea Centers for Disease Control and Prevention (KCDC) showed Thursday.

It was the fifth day in a row that the number of patients infected abroad outstripped the number infected domestically.

Nationwide, 61 people tested positive for the coronavirus Wednesday, including 14 who were locally infected: six in Seoul, three in Gyeonggi, two in Incheon and one each in Gwangju, Daejeon and Gangwon.

Among the 47 imported cases, 20 were from Iraq, 12 from the Americas, seven from Uzbekistan, four from the Philippines, three from Kazakhstan and one from Egypt. Of Korea’s 13,612 total case load, 1,966 people were infected abroad, or about 14.4 percent.

Two new deaths were reported Wednesday, bringing the country's overall coronavirus death toll to 291 people, while 12,396 people had been declared fully recovered, 48 more than the day before. 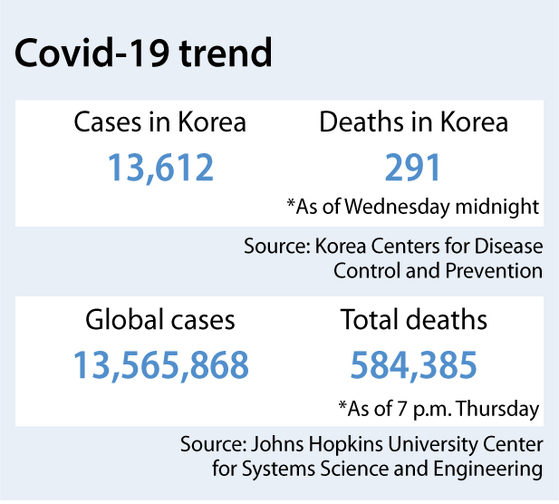 Yoon Tae-ho, a member of the Korean central government’s Covid-19 command center, said during a media briefing Thursday that local health officials were carefully monitoring Korean workers in Iraqi construction sites, hinting that more returnees from Iraq are expected to test positive in the coming days.

About 100 workers from an oil refinery construction site in the city of Karbala in central Iraq arrived in Korea on a chartered plane Wednesday. Around 600 other Koreans are currently working at the site, though it was not immediately clear whether any of them would fly into the country soon.

And in Busan, quarantine officials said Thursday they detected 17 new coronavirus patients from a Russian-flagged fishing vessel at Gamcheon Port, and one patient each in two other Russian-flagged vessels docked nearby, bringing the total to 19 in a single day.

At least 21 local longshoremen were said to have made contact with the Russians, a figure that could rise as contact tracing continues.