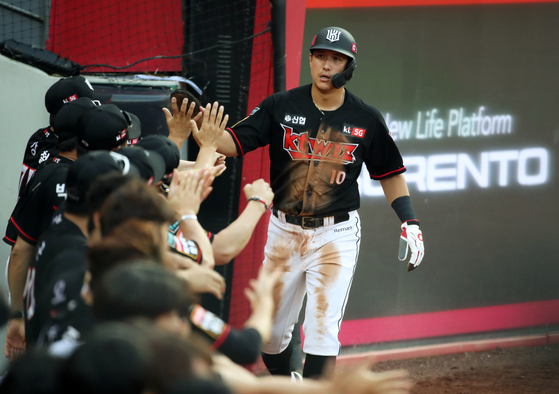 Hwang Jae-gyun of the KT Wiz, right, high fives his teammates after adding an RBI during a game against the Kia Tigers at Gwangju-Kia Champions Field on July 8. [YONHAP]

The weather is heating up and the KT Wiz are too. At the front of that charge is infielder Hwang Jae-gyun, who's return to form has coincided with the Wiz's recent success.

During the first week of July, the Wiz beat both the LG Twins and the Kiwoom Heroes 2-1 in back-to-back series. The following week the Wiz did the same thing against the Kia Tigers, and were 2-0 against the Samsung Lions when the series was called off because of rain. This week, the Wiz are tied 1-1 in their series against the Hanwha Eagles as of 5 p.m. Thursday.

With the exception of the Eagles, every other team the Wiz has beaten this month sit above them in the table.


Hwang played a significant role in that success.

Like KT, Hwang started the season badly. Due to that, he was pushed all the way down to seventh in the lineup. But as manager Lee Kang-chul started to assign him back to second, the Wiz suddenly started to see success.

Looking at Hwang’s statistic for the month of July, he’s been one of the hottest player with a batting average of 0.418 with 23 hits and six RBIs.

His statistics come as a huge surprise as he started the season with a batting average of disappointing 0.295 in May and 0.254 in June. Due to this, he was on the Wiz’s injured list twice. As his struggle in the batter’s box continued, he finally made changes to his style of play, stepping away from his aggressive playing style. Instead, he started to get more walks and his statistics have gone up, with the Wiz reaching a winning percentage at 0.500.

Below are edited excerpts of an interview with Hwang.


Q. You’ve been batting very well recently. How did you make such improvements in a short period of time?

A. I talked to batting coaches Kim Kang and Cho Choong-keun a lot. There weren’t any technical changes. They helped me with my mental game. Honestly, since I wasn’t seeing good results, I was frustrated. But at that time, I was getting encouragement [from the coaches] instead. It's about time that my cycle should be back on the rise, too. The timing worked out and everything is good.


Q. In May, you struggled, especially in clutch situations. What happened?

A. Since [my batting average in clutch situations] was continuously being mentioned, I started to think about it. Baseball is a mental game. When I start getting shaky at one part of the game, there’s a higher possibility of seeing bad results. At that time, I started thinking: "If I can’t figure this out, that’s going to be a problem." I had that uncertainty in myself. That’s why my results were bad.

A. Recently, my batting average looks fine and I had more RBIs than before. I also hit a home run. When I’m in scoring position, I now have confidence that I can do it. Of course, I have a long way to go because it’s only been a week or two since it got better. It’s important to keep this streak.


Q. You hit the winner against Heroes’ closer Cho Sang-woo. How did you feel?

A. He is a pitcher who has a great fastball. I went in there thinking that he would use a fastball as his last pitch. The direction of my hit was good and I had luck on my side.


Q. This season, you've been getting more walks and, at times, trying to bunt. How's that going?

A. When I just couldn’t play baseball, I had a private chat with manager Lee Kang-chul. I apologized for not fulfilling my responsibility. In addition to that, I told him that I’ll try any strategy that he wants, whether it’s a sacrifice bunt and run or anything. I said I’ll work as hard as I can and told him to use me without any hesitation.


Q. After the Wiz’s game against the Eagles on June 27, manager Lee Kang-chul complimented you. How did you feel?

A. Our manager respects starting players’ style of play and characters. But I was playing really poorly. I wanted to play like our manager was expecting me to do. As I was batting for the good of the team, not my personal stats, my batting started to get better.


Q. People say the Wiz's batting lineup has gotten better since you were assigned in second. Do you feel that too?

A. If our leadoff can’t get on base, I concentrate on getting on base. When the batters in the batting lineup make a scoring opportunity, I have to get the job done. It wasn’t the position that I was assigned to in the past few years, but personally, I like being the second batter in the lineup. It’s a new kind of fun.


Q. This season, you are getting more recognition for your defense than batting. Is that true?

A. Compared to last season, I would say my area of defense has gotten larger. I want people to recognize me as an infielder who can get batters out when I throw to first base. I want to be better.


Q. Although it’s still July, it seems like the Wiz are on the rise. What has changed?

A. This is when we really need the experience of the veterans. We have to strengthen our teamwork and fight through the tough times. There are younger players who are in a slump so I try to talk to them a lot. I want to help the team [keep on] getting better.