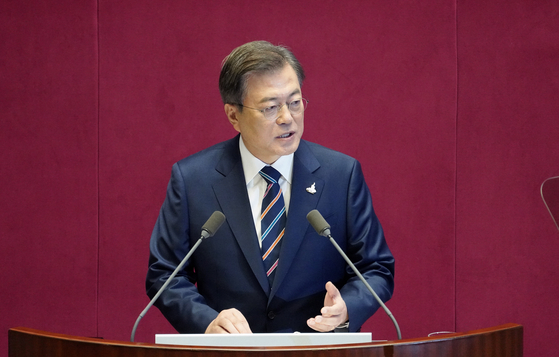 President Moon Jae-in makes a speech at the National Assembly on Thursday. [YONHAP]


President Moon Jae-in is arguing that a proposed expansion of the capital gains tax designed to capture more retail investors should not worry retail investors, according to the Blue House.

The comments came as the administration battles a falling approval rating and as small investors support stock prices, keeping the markets strong in the face of economic challenges.

According to the Blue House on Friday, President Moon emphasized the significant role that retail investors played in the local equity market this year, which struggled during the pandemic, and noted that the new tax is not designed to discourage stock trading.

The government plans to announce tax reforms, which are expected to include a broadening of the capital gains tax and a lowering of the transaction tax, next week.

In late June, the government announced taxing of gains exceeding 20 million won ($16,600) made from stocks and other financial instruments from 2022.

The tax rate proposed is 20 percent for gains below 300 million won a year and 25 percent when gains are above that level.

To somewhat balance the capital gain expansion, the government will lower the transaction tax to 0.15 percent, from current 0.25 percent, by 2023.

The backlash was immediate.

Some were outraged at the possibility of double taxation, while others objected to the fact that the tax would have to be paid every month.

The Finance Ministry said the plan was only a proposal and that the tax could be collected every quarter or every six months.

President Moon has been facing a decline in his approval rating, in part due to public frustration over the government’s regulatory war on property and the sexual harassment and assault allegations against late Seoul Mayor Park Won-soon, a high-profile member of Moon's party.

According to the latest survey by Realmeter, released on Thursday, Moon’s disapproval was 51.7 percent, up from the previous week’s 46.5 percent, while the approval rate fell to 44.1 percent, down from 48.7 percent.

Retail investors this year have played a vital role in keeping the stock market alive. Stocks plummeted to their lowest levels in 11 years, with the Kospi closing at 1,457.64 on March 19. It is now trading around 2,200.

The rapid recovery of the market was largely attributed to retail investors.

According to Korea Exchange, in the first half of the year, retail investors net purchased nearly 32 trillion won of Kospi stocks. This is an all-time record. These purchases exceeded those made by foreigners and institutional investors.