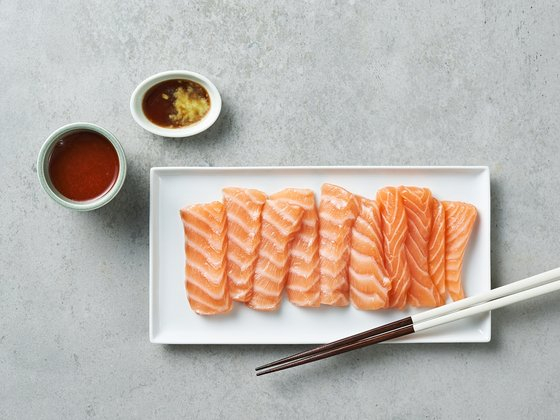 
The Korean summer starts with samgyetang, a ginseng and chicken soup believed to ward off the heat, and sales of meat typically jump up accordingly. For some reason, that didn't happen this year.

Samgyetang season starts at Chobok, the first day of the hottest season according to the traditional Korean calendar, which fell on July 16 this year. But rather than chicken, this year's Chobok bestseller was seafood, with sales surpassing all meat products.

According to data from e-commerce platform WeMakePrice, sales of seafood in the week leading up to Chobok, between July 6 and 12, increased five times compared to the equivalent period the previous year, from July 2 to 8.

Sales of octopus and squid skyrocketed 483 percent while sales of lobster and crab increased 415 percent on year. Eels gained popularity and saw a 346 percent increase in sales, and sales of domestic abalone from Wando, South Jeolla, shot up as well.

Meat sales also increased, but not as much as seafood.

Chicken sales jumped 152 percent on year. Chicken is a key ingredient in samgyetang and baeksuk, another chicken dish served with ginseng and scorched rice — the two traditional dishes that are commonly eaten to celebrate Chobok. However, some meat items such as imported pork and roast duck saw sales decline.

According to data from e-commerce site Market Kurly, sales of sashimi between January and July 13 increased by 116 percent compared to the same period a year earlier. In the February-March period when the coronavirus pandemic paralyzed the country, sales jumped up nearly 254 percent.

Salmon greatly contributed to the sharp increase in sashimi sales, taking up nearly 80 percent of all sashimi sales. Halibut was the second most popular sashimi product after salmon.

Market Kurly launched its red-banded lobster sashimi on February. By sales, the product now ranks third out of all the products sold on the website.

Also at the top of the list is hongeo — a fermented skate that is an acquired taste even among Korean consumers. It was newly introduced in April on Market Kurly and is gaining lots of attention, ranking fourth in sales. Other types of sashimi such as raw tuna, flounder and sea bass are steadily gaining popularity on the website as well.

The skyrocketing popularity of seafood is largely attributed to companies’ “cold-chain” delivery services. In the domestic logistics industry, cold chain refers to a refrigerated end-to-end logistics network that keeps products, especially food, cold as they are transported. Thanks to the comfortable delivery service, more Koreans are ordering seafood through online stores amid concerns over the spread of the coronavirus.

Another driving force behind seafood’s popularity is the rising price of meat. The price of agricultural and livestock products in June increased 10.5 percent compared to the same period a year ago, according to Statistics Korea. Pork prices were up about 16.4 percent while beef prices increased 10.5 percent.

“Sashimi products on online stores are known for their firm texture as they are refrigerated for at least three hours,” said Gwon Hyeok-jin, a merchandiser from Market Kurly. “We are constantly trying hard to improve the taste and freshness of our products.”