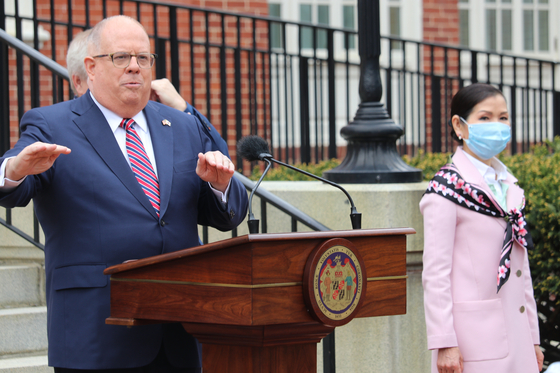 Maryland Gov. Larry Hogan, speaking at a news conference on April 20, announces that the state had received 500,000 Covid-19 test kits from South Korea with the help of his wife, Yumi Hogan, right. [AP/YONHAP]

Hogan in a Washington Post opinion piece published Thursday, “Fighting alone,” said that Trump had been lavishing praise on the leaders of China, Japan and North Korea at a private dinner sponsored by the Republican Governors Association in Washington in February.

He wrote: “Then, the jarring part: Trump said he really didn't like dealing with President Moon from South Korea. The South Koreans were ‘terrible people,’ he said, and he didn't know why the United States had been protecting them all these years.”

Trump was said to have complained, “They don't pay us,” in reference to Seoul.

Trump apparently made the remarks in reference to ongoing negotiations over bilateral defense cost-sharing negotiations. Seoul and Washington have struggled to seal a new Special Measures Agreement (SMA) after their previous deal expired on Dec. 31 last year. The Trump administration has been pressuring Seoul to pay drastically more than previous years.

At the event, Trump talked about how much he respected Chinese President Xi Jinping, how much he liked playing golf with his "buddy” Japanese Prime Minister Shinzo Abe and how well he got along with North Korean leader Kim Jong-un. Hogan didn’t “remember him mentioning the virus,” despite the imminent threat of the new coronavirus outbreak.

The governor noted Trump’s remarks at the dinner were made in front of his wife, Yumi Hogan, who was born and raised in Korea.

“Yumi was sitting there as the president hurled insults at her birthplace,” Hogan wrote. “I could tell she was hurt and upset.”

Hogan has been fondly referred to as the “son-in-law of the Korean people” by President Moon.

He used this special connection with Seoul to acquire 500,000 coronavirus test kits from Korea in April to drastically ramp up his state's testing capacity. Hogan has credited his wife's diplomacy with Seoul for the successful procurement of the tests, calling her his “special ally.”

The op-ed went into detail over how that the acquirement was made, and recounts how Hogan, despite being a Republican governor, was not able to receive help from the Trump administration to get Covid-19 tests.

“Governors were being told that we were on our own,” he recounted. “It was sink or swim.”

This led to more “dramatic” action, and the governor and his wife asked Moon for assistance, which led to the speedy purchase of the test kits from Korean biotech company LabGenomics for $9 million. He dubbed this process of vetting and negotiations between his state and scientists and their Korean counterparts “Operation Enduring Friendship.”

He wrote, “We'd all seen how South Korea, hard hit at first by the virus, conquered its outbreak with a swift program of social distancing, testing and contact tracing.”

A plane carried the test kits to the state on April 18, and the Hogans received them in person at the airport in Baltimore.

Trump later criticized Hogan over the purchase from Korea, saying the governor should have called U.S. Vice President Mike Pence, the head of the White House task force on coronavirus, and “saved a lot of money.” Hogan, however, brought this up with Pence in a phone call a few days later, and the vice president was said to have “chuckled,” but that there “wasn't much else to say.”

This is not the first time that Trump has been described as disliking President Moon. Bob Woodward, an associate editor of the Washington Post, recounts in his 2018 book “Fear: Trump in the White House,” that Trump disliked Moon early on in his presidency, criticizing the trade deficit between Korea and the United States and the cost of stationing 28,500 U.S. troops on the peninsula.

More recently, John Bolton, the former U.S. national security adviser, described in his memoir, "The Room Where It Happened," that “Trump wanted Moon nowhere around” for a meeting with North Korean leader Kim at the demilitarized zone (DMZ) on June 30, 2019, during Trump’s visit to Seoul.

Trump has frequently referred to Moon as his “friend” in public remarks, including in a phone conversation in April after the ruling party’s victory in general elections in Korea.

The United States recorded over 77,000 new Covid-19 cases Thursday, the most in a single day. It has over 3.57 million reported cases and over 138,000 deaths, the highest in the world.