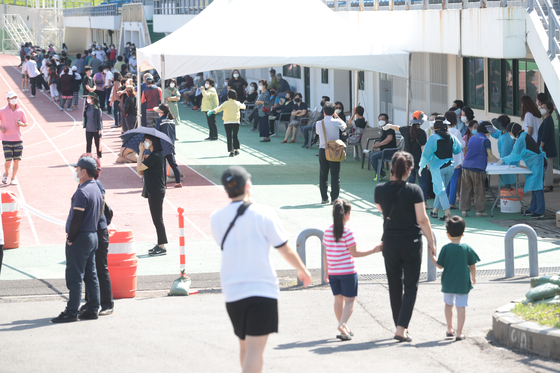 Hundreds of people line up to get tested for Covid-19 at a gymnasium in Hallim-eup in Jeju City Friday after a Seoul women tested positive after traveling to the island earlier this month. So far, four people linked to this woman have been infected with the virus. [YONHAP]


Korean health authorities stressed Friday that improperly wearing a face mask increases the risk of coronavirus infection by five times — and specifically called out chin-donning — as 60 new cases were confirmed in the country.

It is the second consecutive day in which 60 or more cases were reported.

She added that there is a “five times higher likelihood of being infected" if masks are not worn or are worn improperly, without covering the nose and mouth.

Health authorities cited one case based on their contact tracing where people rode in the same car as a person infected with Covid-19 for over an hour but were not infected because they were all wearing masks.

People have become more lax with mask-wearing in the summer heat.

“Wearing a mask over your chin has no effect at all,” said Jung. She noted that people wear masks outdoors when they can keep 2 meters (6 feet) apart and don’t need to, but when they are indoors, in a confined space, they often take off their masks. “There is a need to keep masks on indoors rather than outdoors to prevent the spread of the coronavirus.”

The proper way to wear masks is to cover the nose and mouth, avoid touching the surface and to wash hands before and after wearing it.

As of Thursday midnight, 60 new Covid-19 cases were reported in Korea, raising the total caseload to 13,672, according to the KCDC.

This marks the third day this week Korea’s coronavirus cases remained at or above 60, with 62 cases reported Monday and 61 Thursday. Two more deaths were reported, bringing the total death toll to 293.

Seven local cases were in Seoul, five in Gyeonggi, five in Gwangju, three in Jeju and one in Daejeon.

Of the 39 new imported cases, 25 were detected by quarantine authorities at airports and sea ports. Of the imported cases, 20 were arrivals from Russia, eight from the United States and six from Iraq.

The Korean government said it plans to send chartered flights to Iraq next week to bring in Koreans amid an uptick in cases there.

Three Russian-flagged vessels docked in Busan have over 22 sailors confirmed to have contracted the virus on the ships since Wednesday. Health authorities said that coronavirus tests will be conducted on all crew of Russian ships with a lot of contact with local workers starting Monday.

Imported cases have remained in the double digits for 22 days since June 26.

Jeju confirmed at least four new cases linked to a woman in her 70s from Gwangjin District, Seoul, who visited the southern island for six days earlier this month. This woman was confirmed not to have been wearing a mask while going about the island, and despite developing Covid-19 symptoms four days into her trip starting July 11, she did not suspend her travels.

Suwon prosecutors on Friday questioned Lee Man-hee, the leader of the Shincheonji Church of Jesus, charged with violating Korea’s infectious disease control and prevention laws. Lee has been accused of submitting false documents, thwarting contact tracing and effects to contain the coronavirus and destroying evidence. More than 5,000 cases are linked with Shincheonji, a secretive religious sect which has been at the center of the early stages of the Covid-19 outbreak in Korea.

Jung Eun-kyeong, head of the the Korea Centers for Disease Control and Prevention (KCDC), demonstrates the proper way to wear masks Friday. [KCDC]