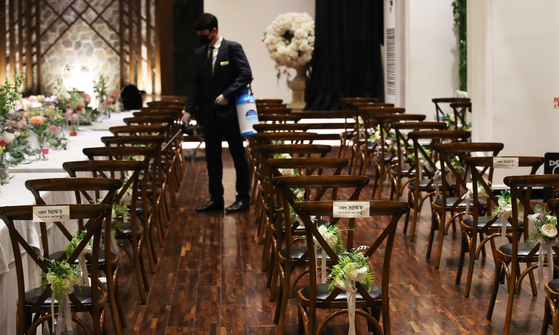 After couples rushed to postpone their weddings in March and April during the peak of the coronavirus, business at banquet halls is slowly starting to pick up again after the curve was flattened. [YONHAP] 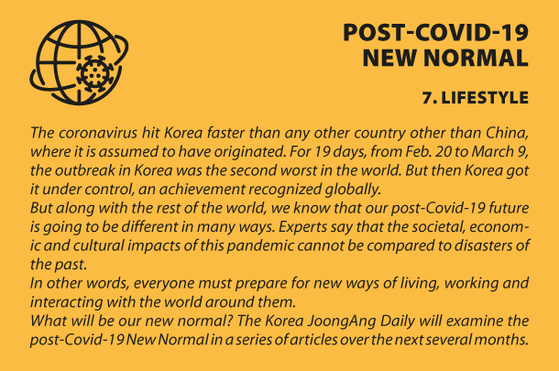 The terms B.C. and A.C. may soon stand for something totally different after the coronavirus pandemic is finished taking its toll on the world.

Life before coronavirus and after coronavirus will seem worlds apart. Even as the pandemic continues now, the everyday movements of life as we once knew it vastly differ.

When the virus was at its peak in Korea, infecting as many as hundreds of people daily between February and March, social distancing measures enforced by the government led to the disappearance of public gatherings.

This was particularly difficult in Korea, where collective activities play a vital role in the cultural fabric of society.

Whether it’s something to celebrate or mourn, Koreans do it together.

Marriages, funerals, and even after-work dinners are seen as requiring mandatory attendance because, for Koreans, showing up to those events is what matters.

But with the biggest spike in infections traced to a public gathering, ceremonial halls, funerals and restaurants, spaces once buzzing with people, now lie empty.

As society enters a post-coronavirus society, will this mark the end of Koreans' social lives? What will the new normal look like after coronavirus?


Online or face-to-face?
Between March and April, hotels and ceremonial halls remained eerily empty as betrothed couples rushed to postpone their weddings to the latter half of the year, hoping that the virus situation will be contained by then.

However, there was one couple who went ahead with their wedding in April, while still practicing social distancing measures.


As part of telecommunication company KT’s campaign “Caring About You,” which aimed to connect people through the so-called "untact" or contactless system, the company reached out to Ha Ji-soo and Park Ji-ye and provided them a live streaming service of their wedding in Seoul.

It wasn't possible for most of Park’s family and relatives to come to Seoul as they resided in Daegu — then the epicenter of the virus outbreak in Korea. 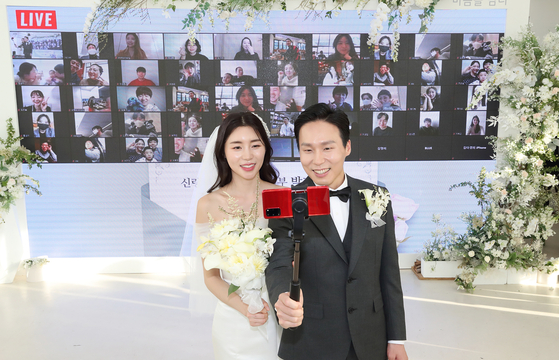 Park Ji-ye and Ha Ji-soo became the first couple in the country to be wedded online, with the help of telecommunication company KT as part of their campaign "Caring About You." [KT]


Instead of delaying the ceremony like other couples, Park and Ha connected with their guests online who were able to congratulate the newly weds through their screens.

Entertainer Park Myung-soo personally attended the event to offer his congratulations as the couple became the first to be married online in Korea.

Others who still want to celebrate are choosing to downsize.

Jung Lark-mi and Oliver Brandenburg got married two weeks ago, but instead of having a wedding ceremony, the couple held a small after party with friends instead.

“We weren’t planning on a big wedding ceremony, but we were going to hold two separate gatherings — one for my family and their acquaintances and one for our friends,” Jung told the Korea JoongAng Daily.

“But after infections swung upwards, we canceled the family ceremony since seniors are at a higher risk [of infection]. We decided to go ahead with the one for our friends, but we only invited those whom we felt were closest to us and would be able to truly feel happy [for our marriage]. We left the choice [to attend] entirely up to our guests. The party started in the evening and went late into the night, and we tried to spread people out so that the restaurant didn't get overly crowded.”

Since July, offline ceremonies are slowly resuming, but industry insiders say outdoor venues have become a lot more popular, probably because it is easier to practice social distancing at those venues and guests feel more comfortable.

“Outdoor weddings are in vogue since the outbreak,” said Lee Yu-na, Manager of Sales & Marketing at Banyan Tree Club & Spa Seoul in central Seoul. “Smaller weddings were already quite popular but due to the pandemic, more and more people are looking into having such weddings. Just two years ago, the average number of guests per wedding was about 170 to 200, but now it has fallen to about 100 to 150. We often also hold weddings with less than than 50 guests.”

This is a common saying in Korea that many are accustomed to. But not even the sacred last ceremony for those who have passed has escaped the grips of the coronavirus.

Instead, people are either choosing to quietly bury the dead or invite only their closest family and friends.

Unlike wedding ceremonies, funerals are not being shifted online, as live-streaming such ceremonies may be perceived to be inappropriate. 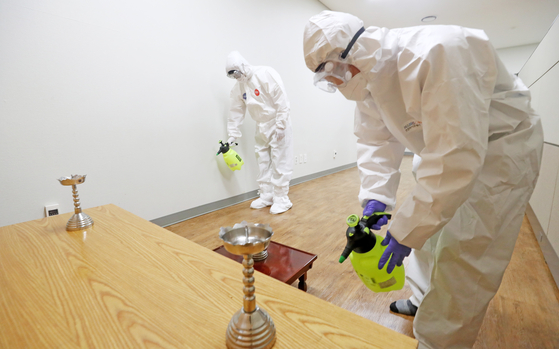 Funeral halls are strictly following special disinfection measures to prevent the spread of the coronavirus. [NEWS1]


Shin Eun-jin, whose grandmother passed away in May, said that the decrease in the number of visitors was evident.

“My parents said that for every 10 people they would have invited, they only invited one,” Shin said. “Hand sanitizer was provided and masks were worn at all times. People did try to sit apart from each other, and instead of sticking around after — eating, drinking, talking and mingling, people would just talk for a little while before leaving.”

Since funerals are often events at which seniors linger, cities are taking extra caution to try to contain the virus at funeral halls across the country.

In some funeral halls in Seoul and Goyang, Gyeonggi, they have implemented a smart attendance system using a QR code to keep track of all the visitors coming in and out.

Visitors must scan a QR code with their phone which immediately leads them to a form they must fill out with their name, phone number, temperature, whether or not they have respiratory problems and their recent overseas travel history.

But taking into consideration the age demographic of visitors to such funeral halls, this system may not be the most feasible.

“About 70 percent of the visitors are seniors, well above their sixties,” a funeral worker who wished to remain anonymous said. “They don’t have smartphones, and some of them even have trouble writing down their phone numbers, let alone using smart technologies. So most of the visitors just jot down their information on paper.”

"The new norm of funerals in Korea will be having a small private family event," wrote Ham In-hee, sociology professor at Ewha University in a column in the Segye Ilbo in June.

"Many thought funeral culture would be the least affected by Covid-19 in Korea because of how much Koreans regard its importance. They spend so much time, not to mention tons of money, to follow the formalities to make sure the deceased don't feel 'disappointed.' But deep at heart, many thought it was too much and even the guests may have felt burdened. Since the coronavirus gave both parties a good reason to stop what they were doing for now, it will be quite difficult even after the virus for them to go back to the usual custom. It will be a good time to think about what's really important and scaling down a little." 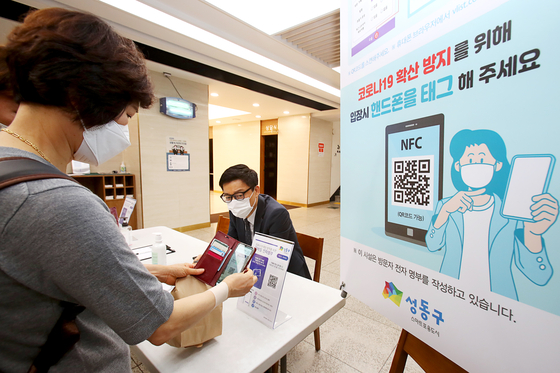 
Untact dinners
How Koreans conduct corporate dinners is another unique aspect of the culture.

Before the coronavirus, nighttime streets filled with people clad in suits — somewhat disheveled and clearly drunk — stumbling home, was not an unusual sight.

In online communities, posts that draw the most sympathy are those complaining about corporate dinners which are seen as mandatory in terms of attendance.

Amid the coronavirus pandemic, some companies are choosing to take those dinners online. 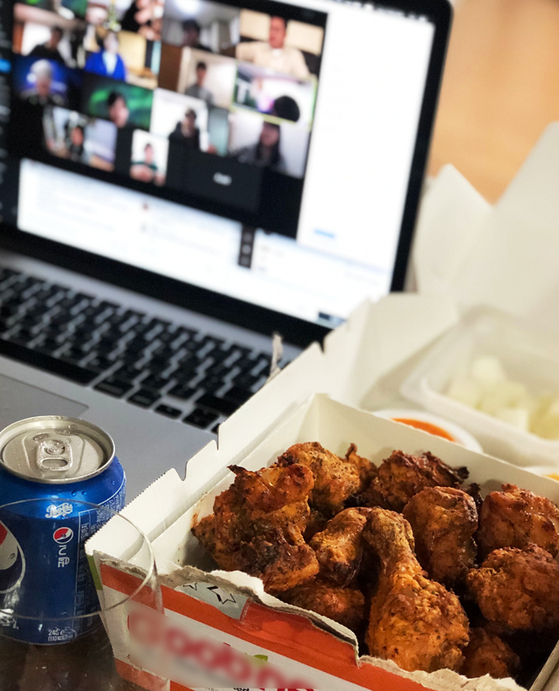 Some companies are holding corporate dinners online, talking to each other through video conferencing services like Zoom while ordering food to be delivered to their homes. [GREPP]


“I think our team does it every one or two months,” said Sofie Lee, a worker from Grepp, a software company in Korea who started to have online dinners from mid-March. “We each tell the person who has the corporate card what we want to eat, and then we log on to Zoom and each eat our food when it arrives. But it can be awkward when the food is delivered at different times — sometimes I just have to watch other people eating while I’m not or vice versa.”

Other than that, Lee said she's happy with the new norm for company dinners.

“I think we’re comfortable because attendance isn’t mandatory,” Lee added. “And we get to eat delicious food at our homes. One upside of this is that no one is left out, unlike being offline. In restaurants, it’s hard to spot people who are not talking much. But it’s much more noticeable online, and it’s easier to talk to them.”

But not everyone shares Lee's outlook.

“Since we started to work from our homes, I thought the company culture would change, but that all went up in flames when my boss suggested to hold corporate dinners online,” an anonymous post read in one online community. “I don’t know if online dinners are part of the 52-hour workweek, or whether it’s really necessary to see my co-workers this way.”

Regardless of employee's thoughts on these online gathering, it seems that they're highly unlikely to become the new norm, sociology professor Choi Hang-sub at Kookmin University evaluated.

“There may be various social changes due to the coronavirus, but the disappearance of social gatherings isn’t one of them,” the professor pointed out.

“These events played a part in forming and hardening the trust, solidarity and bond of each circle of community. This culture is something that has endured for a very long time — even during this era where people are becoming more individualistic. For Koreans, not being able to gather was an especially emotionally painful experience, and it’s one of the cultures that will be least affected by the coronavirus, as it will bounce back as soon as it’s over.”

Buy one, give one