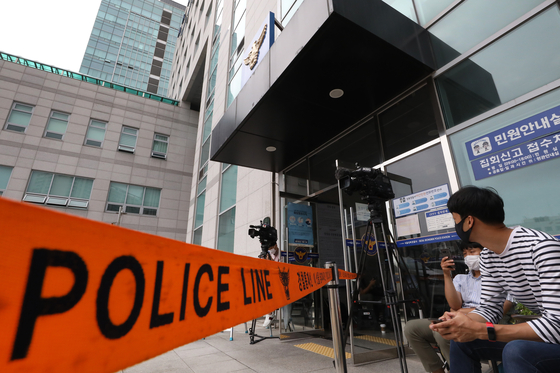 Reporters wait outside the Seongbuk Police Precinct in central Seoul Sunday, where aides to the late Seoul Mayor Park Won-soon were summoned for questioning. [NEWS1]

Police investigations into the suicide of Seoul Mayor Park Won-soon are going nowhere as one of his key aides refuses to show up for questioning while a local court rejected a police request to access the communication records for Park’s three mobile phones.

At least four of the mayor’s aides showed up at the Seongbuk Police Precinct in central Seoul by Sunday to answer questions about the suicide on July 9, including his former chief of staff Koh Han-seok, who is believed to have been one of the last people Park talked to on the phone before he was found dead on Mount Bukak, near his residence, at 12:01 a.m. on July 10.

But Lim Soon-young, Park’s special adviser for gender issues, who faces allegations that she informed Park that a former secretary filed a complaint with the police accusing him of sexual harassment, has yet to appear for questioning.

The Seoul Metropolitan Government said last Friday that Lim had tendered her resignation, but that the office decided to suspend her from duty instead, given her need to cooperate with the city’s probe into Park’s sexual harassment allegations.

Park’s former female secretary filed a complaint with the Seoul Metropolitan Agency at 4:30 p.m. on July 8, and was questioned by the police up until 2:30 a.m. the next day. The main opposition United Future Party (UFP) and others backing the accuser have suggested that the police leaked the complaint to Park and his aides, though the police adamantly denies it.

Officers at the Seongbuk Police Precinct who are investigating Park’s suicide motive requested prosecutors ask a local court for a warrant to access communication records of Park’s three mobile phones — one for work and two for personal use — but the Seoul Northern District Court rejected the request last Friday, saying there was no need, largely given the apparent fact that he wasn’t murdered.

That leaves police officers with Park’s work phone — known to be an iPhone model — which was found beside his body on Mount Bukak. Police had already received a warrant right after his death to look into his call records, but only for July 8 and 9.

Police said over the weekend that the phone has been sent to digital forensic officials to be unlocked, but that alone is expected to take a couple of months.

While the Seongbuk Police Precinct is investigating Park’s suicide motive, the Seoul Metropolitan Police Agency said last Friday that it officially kicked off a separate probe looking into allegations that officials in the Seoul Metropolitan Government turned a blind eye to the mayor’s sexual harassment, which Park's accuser claims to have persisted for more than four years.

Seoul government officials have denied knowing anything about the accusations, and on Sunday urged the victim’s representatives to accept its proposal to be a part of its own probe looking into the allegations.

Last Wednesday, the Seoul government said it would form a joint investigative team with outside experts to “thoroughly reveal the truth” about the accusations, and subsequently asked the victim’s representatives — mostly women’s rights activists — to join the team, only to be rejected.

The government office later said the team will be composed only of outside experts and pleaded with the victim’s representatives to join, but the victim’s side refused again, saying they didn't believe city government wanted to genuinely discover the truth.