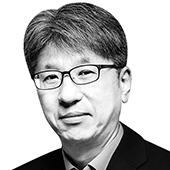 
Members of the ruling Democratic Party (DP) rarely go against party lines. Former DP Rep. Keum Tae-sup once tried — and got penalized for it. Yet even as the vast majority of DP lawmakers speak with one voice, there are two figures who do not always sing with the chorus. Those two are Rep. Park Yong-jin and DP Supreme Council member Kim Hae-young.

On July 14, I had a chance to meet Park in a coffee shop in downtown Seoul, just hours after he had called the DP “irresponsible” on a morning radio show for its handling of the sexual harassment allegations against the late Seoul Mayor Park Won-soon, who was a DP member. The lawmaker pressed the party to open an internal probe into the case, which was the first time that anyone within the DP went public with such a demand. Earlier that same day, Park also visited the mourning altar for Gen. Paik Sun-yup, offering condolences to the 1950-53 Korean War hero who was dismissed by the DP as a “traitor” for his serving in Japan’s Imperial Army.

“You look tired,” I said to the lawmaker. “I am,” he replied, adding, “I expected [the DP’s flak] when I called for a probe [into the suicide of the Seoul mayor] or visited [Paik’s] mourning altar. What other choice do I have now but to bear [the criticism]?” He continued, “I’m just so sick of seeing the DP and the main opposition United Future Party (UFP) wrangling with each other.”

During a DP party meeting on July 13, Kim — the Supreme Council member — became the first person in the DP to apologize to the ex-Seoul mayor’s former secretary after the party had addressed her as “a person who claims of damage” — instead of using the more common term “victim” — in an apparent effort to distance the late mayor from her claims. When I called him to ask about the motive behind the remarks, he simply said, “I [apologized] because someone [in the DP] had to do it.”

Both Kim and Park mustered great courage in conveying their thoughts last week, only to face an angry backlash and calls to leave the DP. Why can’t the DP embrace different viewpoints? A look at the party’s self-righteous attitude on each and every political issue of the past offers an answer to this question.

The crisis facing the DP was actually self-inflicted. It all began with the revelation in late April of then-Busan Mayor Oh Keo-don’s alleged sexual harassment of his aide, which was exacerbated by several moral turpitudes and real estate speculation scandals involving its first-term lawmakers. The party solidified its dictatorial image by securing the chairmanships of all 18 parliamentary committees, penalizing Rep. Keum and backing Justice Minister Choo Mi-ae’s pressuring of Prosecutor General Yoon Seok-youl. The state-run Incheon International Airport Corp.’s decision to put 1,900 outsourced security guards on the permanent payroll triggered seismic outrage from young job-seekers, and the pinnacle of public furor was reached when the central government announced its latest real estate policies earlier this month. The sexual harassment case involving Seoul Mayor Park finally drove the DP over the brink.

Problems can always occur, but what really disappointed the public were the DP’s self-righteous reactions to them — how the party tried to stick up for Rep. Yoon Mee-hyang — as it did for former Justice Minister Cho Kuk — how it penalized Rep. Keum for his refusal to back the party’s stance on the establishment of an extraordinary law enforcement agency to investigate high-level officials, including prosecutors and judges, and how it urged the judiciary to open a retrial of former Prime Minister Han Myeong-sook’s bribery case.

The DP’s highhanded attitude was on display after the Seoul mayor’s death, when DP Chairman Lee Hae-chan called a reporter an expletive for his asking about the party’s reaction to the sexual harassment allegations. Chairman Lee claimed it was “impolite” to raise the subject so soon after the mayor’s suicide. After three days, Lee apologized by having his party’s spokesperson read the apology on his behalf. Amid rising public criticism and media scrutiny, Lee apologized to the mayor’s former secretary in front of cameras on July 15, only to provoke an even fiercer outcry by calling her “a person who claims of damage” again.

A DP lawmaker told me the party was being solely led by Chairman Lee and that no one in the DP leadership could dare to confront him. Rep. Park concurred, saying he was “concerned” about the DP’s conformity.

President Moon Jae-in’s approval rating plummeted to 44.1 percent in a recent Realmeter poll. The DP’s approval rating also plunged to 35.4 percent, just slightly above that of the opposition UFP’s 31.1 percent. The DP must read the underlying message from the public: Put a brake on your arrogance.