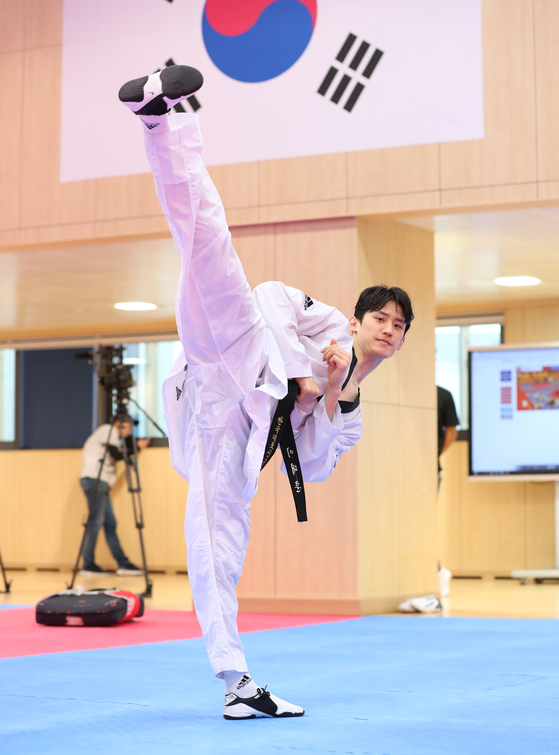 What do you do when you've reached the absolute pinnacle of your sport? If you're taekwondo practitioner Lee Dae-hoon, you just keep on making history.

Taekwondo is a very common sport in Korea — fire off a dollyo chagi (roundhouse kick) anywhere in the country and you're more than likely to hit somebody who spent at least some of their elementary school years going to after-school taekwondo classes. While that ensures the sport's popularity, it also means that actually making it as a professional practitioner is an incredibly competitive career path.

Lee, who has a total of 27 international gold medals to his name, has definitely made a career out of it. Since the world ranking system was introduced in taekwondo back in 2015, Lee has either been the No. 1 in his weight class — he mainly competes in the men's 68 kilograms — or very close to it.

Yet despite all of his success, the 28-year-old is still missing one thing: an Olympic gold medal.

Raised in the dojang


You could say Lee was born to be a taekwondo practitioner. His father, a practitioner in his own right, ran a taekwondo academy, and young Lee started attending when he was three or four years old.

“Instead of going to kindergarten, I was getting my child care at [my parents’] taekwondo academy,” Lee says. “It started with running.”

But it wasn’t until he was around seven to eight years old that he started to become interested in taekwondo.

“Since I was physically stronger, I think I became more aware [of the sport] and I was able to show my talent more to my parents,” Lee says. “Also, I think my strength allowed me to be better at taekwondo compared to others my age or even a few years older than me.”

In third grade of elementary school, Lee competed for the first time, and won. From this moment on, Lee's taekwondo career really began.

Unlike a lot of athletes, Lee faced no problems at home over his unconventional career choice.

“Rather than me telling them that I want to do it, my parents suggested I do it first,” Lee says. “I wasn’t in an environment where people were against it. Instead, they’ve supported me to be better and took care of me to become the best.”


In a country with so many amateur taekwondo aficionados, the route to turning professional is a little obscure.

“When you go to taekwondo academy, or even if you don’t go there, if you have great physical condition, coaches might suggest you take it seriously and teach you more technical skills,” Lee says. “Or you might realize your own potential and decide to take it more seriously yourself.”

More than anything, Lee says natural talent and having a good physical condition are the most important things if you want to take taekwondo to the next level. If young practitioners show that potential, then Lee explained they'll be encouraged to attend a middle and high school that have a structured taekwondo team to get more professional training.

“So when you say you go to a taekwondo academy, you only train for an hour or two, at most,” Lee says. “But if you attend a school that has a structured taekwondo team, then they train more and get more professional training. The training gets tougher.”

From that environment, practitioners can start to compete at local and national events, and maybe even earn a coveted spot on the Korean national taekwondo team, which Lee has held for 11 years now. Once they join the national team, taekwondo practitioners travel around the world to compete in tournaments organized by World Taekwondo (WT) and earn ranking points.

On an international stage


Lee's first taekwondo love was the excitement of kyorugi, free-form sparring bouts between two practitioners. But as he traveled around the world to compete, Lee says he found other reasons to be excited.

“As I got to compete in more international events, not only kyorugi,” Lee says, “the overall background of taekwondo, the etiquette and being able to spread Korea’s culture through the sport made it a little more meaningful.”

The very first time Lee saw foreign taekwondo practitioners was in middle school when an international event was held in Korea. At the time, Lee didn’t take a close look at them, but when he saw them again in high school, he noticed that the taekwondo wasn’t as competitive as domestic contests in Korea.

“When I actually took a close look at them, I was in high school,” Lee says. “At the time, there were some athletes who seemed awkward and only a few of them were good. As I have competed over the past 10 years, I've seen that there are countries that have a more structured program than Korea,” Lee says. “Before, like 10 years ago, when Korean athletes trained, a lot of the foreign athletes would walk over to see how we did it.”

However, as time passed, Lee says that trend has changed completely. As Korean coaches started working in other countries, Lee thinks that the competitiveness of foreign practitioners and taekwondo in general has gone up significantly.


Having joined the Korean national taekwondo team at age 17, Lee has been able to maintain his spot for 11 straight years, making him the longest-serving practitioner on the team, ever. For Lee, this consistency is what he's most proud of.

“There were older taekwondo practitioners who were better than me,” Lee says. “But they couldn’t do it for 11 straight years. That’s how hard it is to get onto the Korean national taekwondo team. So just the fact that I’ve been able to do it for 11 years makes me proud and, to be honest, surprised.”

Despite his own surprise, Lee has proven time and time again why he deserves to represent Korea. At the 2010 Asian Games, Lee picked up gold in the men’s 63 kilograms, and he repeated that success two more times, at the 2014 and 2018 Asian Games.

“I guess in amateur sports, the top and highest-level event is the Olympics,” Lee says. “I’ve won multiple golds in other events, but just because I don’t have an Olympic gold medal, I worry that some people think that I may not be the best taekwondo practitioner. So I really want to, or have to, win gold at the Olympics.” 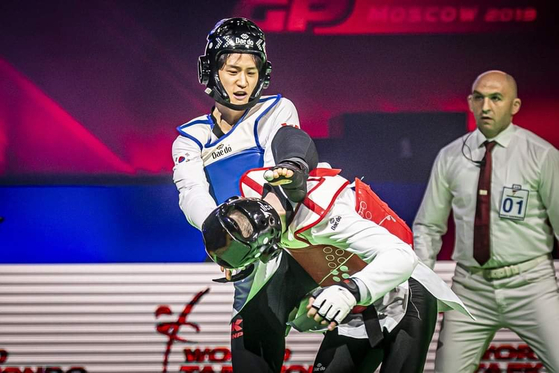 Looking at World Taekwondo’s Olympic kyorugi rankings in men’s 68 kilograms, Lee towers over the competition with 497.80 points. Bradly Sinden of Britain is ranked second, but he's more than 100 points behind Lee.

The Korean star really doesn't want to take that for granted.

“I’m sure those athletes who are not ranked No. 1 are working hard to become world No. 1,” Lee says. “But once you reach that spot, you start thinking that the ranking isn’t that important. The same applies to me. When I drop a spot, I want to go back up. But [now that I'm at the top], I think the ranking is just a number.

"I always want to be the top ranked player, but just because I became world No. 1, I don’t think I can let myself loose.”

Despite being No. 1, Lee has always trained thinking that he can’t win all the matches. As he still trains with the same mentality, he says that the top spot has never let him get lazy.

But Lee still has his strength and weaknesses. Although he thinks his physical strength is his greatest strength, when it comes to his weakness, he also thinks it's physical.

“Since there are a lot of athletes who have great speed, flexibility and power compared to me,” Lee says, “I don’t stand out in this category, so I consider that my weakness.”

In addition to his physical weakness, Lee is trying to be less predictable.

“When I was younger, I preferred attacking [my opponents’] faces,” Lee says. “But after a few years, a lot of the athletes figured out that I tend to do that a lot so they started to defend and avoid it well. So now, I’m going back to the very basics and working on more powerful kicks.”


Lee thinks that a big part of his success is thanks to his coaches' realistic approach to training.

“I think the majority of people reach 100 percent, but they can’t get to 101 percent,” Lee says. “If you've reached 100 percent and the coaches keep pushing you, that's more likely to send you back down to 80 or 90 percent, instead of 100. While at 100 percent, if [the coaches] set a goal or provide a more enjoyable atmosphere to train, rather than pushing you to unachievable goals, then you start wanting to do more.”

Although training comes down to the individual’s mentality, Lee believes that it’s actually the atmosphere around him. Nobody knows how to overcome their own limits until they actually do it, Lee says, so it's important for the people around you to provide that atmosphere, so you can realize how to get further the next time.

But Lee hasn't always had that ideal training environment, and back when he was a teenager he found the repetitive stress of high school training quite traumatic.

“I just started it because I thought I was strong,” Lee says. “But since the training was too tough, getting through each day was stressful. Once the day was over, I was immediately worrying about the next day of training, and that gave me a lot of stress. After I joined a professional team, I think my mentality changed.”

Lee also recognizes that athletic superstitions are a mental game.

Back when he was younger he shared the same superstitions as everyone else — if he won wearing the red headgear he was going to lose the next game in blue, for example — but it didn't take him long to realize that was all in his head.

“I thought it would be a tough match, but as I kept on competing, it actually didn’t mean anything,” Lee says. “So that’s when I thought superstitions are something that I've come up with. That’s why I don’t really have one.”


At 28, Lee is already a well-established practitioner, but he has a few years left in him yet.

In the short term, Lee's only goal is to compete at the Olympics. He’s already won silver and bronze, but is still chasing that gold. Beyond that, Lee hopes to spend his career sharing his talent with the next generation.

“After the Olympics, aside from being an athlete, I want to study training methods and help develop players,” Lee says. “I want to have more professional knowledge so I can teach younger athletes and develop another great player. Not only in Korea, but I want to study another language and do that internationally.”