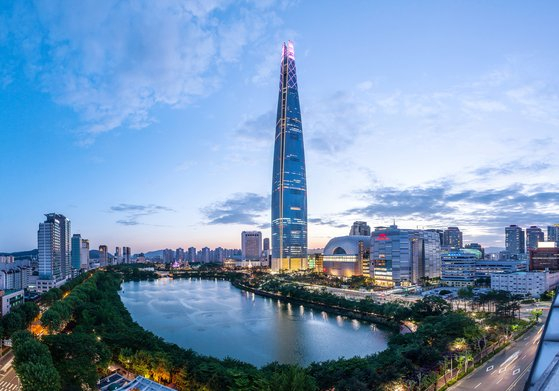 
Camping is the new way for people to enjoy a vacation while exercising social distancing.

The Covid-19 outbreak is preventing holidays abroad, forcing some to consider camping at home.

According to the Korea Tourism Organization, about 37,801 Koreans went abroad in May, a 98.4 percent drop compared to the same period a year earlier.

Campgrounds are filling up. In a report by Shinhan Card’s big data center, about 19,000 of its card users visited campgrounds between March and May, a 209 percent increase compared to the same period last year.

Lotte World Tower in Songpa District, southern Seoul, is planning an event that will offer visitors the opportunity to experience camping without having to get too wild. Starting August, there will be two campgrounds set up on the first and 123rd floor of the building.

On the first floor, car camping will be offered.

On the 123rd floor, which is a viewing platform, tents will be set up.

“In Lotte World Tower’s campgrounds, visitors will be able to spend a night experiencing night views and stars,” said a spokesperson from Lotte Property & Development.

Korea’s camping industry was actually in decline before the virus outbreak. Last year, the Korean branch of Coleman, the world's leading camping gear company, closed up shop after 14 years of operation.

According to retail giant Emart, sales of camping coolers in April increased 85.2 percent compared to the same month last year, while sales in June skyrocketed 102.1 percent. In May, the company faced a shortage of coolers. 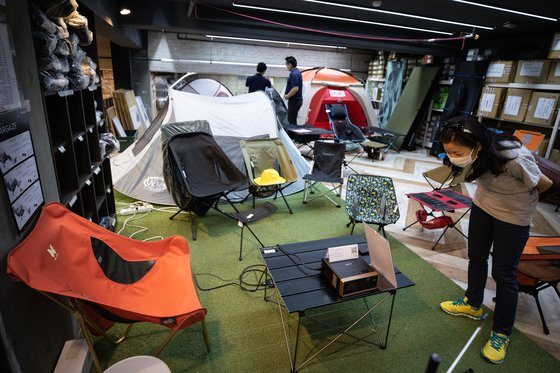 Customers look at camping gear and equipment at a camping store in Seongnam, Gyeonggi. [NEWS1]


According to e-commerce platform WeMakePrice, sales of air mattresses in April increased by 636 percent compared to the same month last year. Tents saw a 133 percent increase.

Automakers are advertising SUVs as being optimal for car camping.

The CU convenience store chain recently launched a “camping box” product containing various food items for camping and a cooler. Only 1,000 camping boxes will be sold through its website and people can order them starting Monday.

Shinsegae’s premium Olbaan brand has introduced a series of beef dishes targeting campers. Daesang’s Chungjungone has come up with a new sausage product that is easy to cook on campgrounds.

“It is expected that more people would turn their eye to camping amid the social distancing campaign,” a spokesperson from the food industry said. “Many companies are trying hard to come up with new food products targeting camping lovers.”