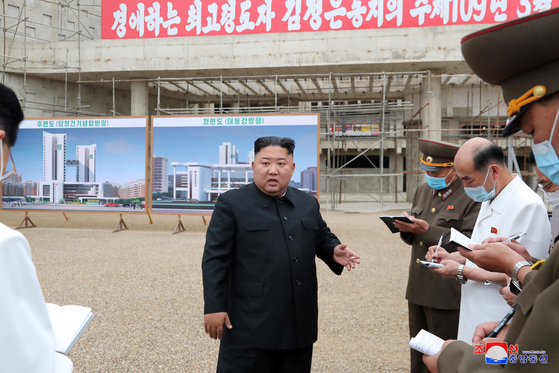 In a guidance visit to the Pyongyang General Hospital, one of Kim’s pet construction projects in the country’s capital, the dictator slammed officials on the construction coordination commission for carrying out construction projects “in a careless manner with no budget,” according to an English-language report from the state-run Korean Central News Agency (KCNA).

The officials were “making a serious digression” from party policy by failing to supply equipment and material to construction sites, Kim claimed, adding they were “burdening the people” by asking for various forms of “assistance.”

Kim “said in the strong terms that if such [a] situation is left to go on, the noble plan and intention of the Party which initiated the glorious and worthwhile construction for the good of the people could be distorted and the image of the Party be tarnished,” the KCNA report read.

He went on to order an investigation into the performance of the construction commission and “replace all the officials responsible and make strict referral of them.”

The construction of the Pyongyang General Hospital is a major project on the party’s agenda, built to mark the 75th anniversary of the founding of the North’s ruling Workers’ Party. Kim himself attended the groundbreaking ceremony highlighting the construction of the hospital on March 17, when he stressed the project had to be completed by the party’s foundation day on October 10.

But Kim’s rebukes suggest the regime is having difficulty obtaining building materials to carry out the task. 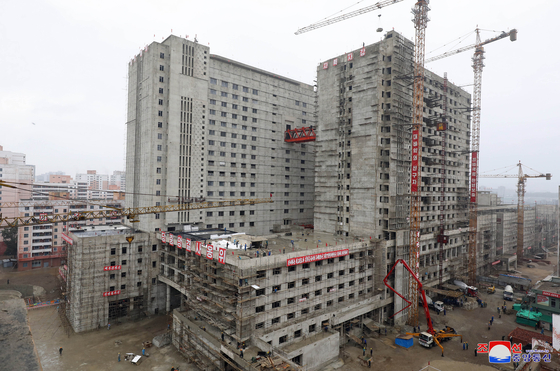 Pyongyang General Hospital under construction, in a photograph released by state media. Several floors are still missing, despite the hospital's completion deadline for October nearing. [YONHAP]


The hospital unveiled in photographs of the construction site released by state media Monday showed little indication that it could be completed on schedule by October, with several buildings missing entire floors.

Analysts in South Korea said Kim’s remarks highlighted growing social discontent in the North caused by officials procuring building materials from the public amid a shortage of goods brought on by the coronavirus pandemic and the resulting drop in trade with China, the North’s top economic partner by a large margin.

“Construction cadres in the party were inevitably forced to secure materials from different institutions, work groups and people across the provinces, but Kim Jong-un appears to have belatedly raised issues with such a practice, leading to his decision to sack those responsible,” said Lim Eul-chul, a professor at the Institute for Far East Studies at Kyungnam University.

Guidance visits to work sites are one of the main duties of North Korea’s leaders, and are attentively covered by state media, though often in a perfunctory manner.

Since taking power, however, Kim has on rare occasions used these visits to admonish party cadres and instill a sense of urgency among officials to expedite his signature platform of economic construction.

But along with the collapse in denuclearization negotiations with the United States — souring prospects of near-term relief from international sanctions — the Covid-19 pandemic has left the country in an especially precarious economic situation where there are few resources available to realize Kim’s goals.

Lim theorizes that if officials are unable to acquire enough equipment and materials to complete the hospital by October, this could yield “a not-so-small blow” to Kim’s image as the supreme leader among his people.