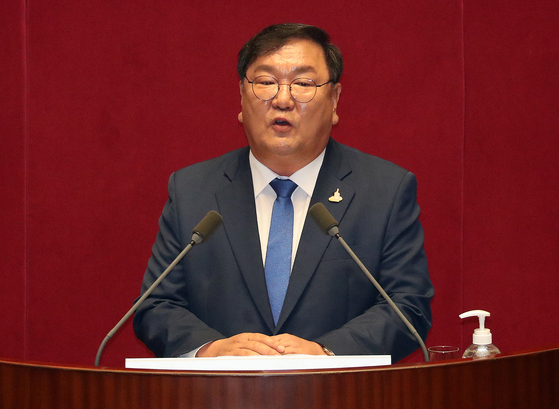 Kim Tae-nyeon, floor leader of the ruling Democratic Party (DP), called for the National Assembly and Blue House to be moved from Seoul to Sejong City.

“We have to complete the process of creating the administration capital [of Sejong City],” Kim said in an address at the Assembly Monday. “For the first time in Korea’s history, the population in Seoul and surrounding areas has surpassed that of the rest of the country this year […] The influx of population in Seoul and surrounding areas is worsening job prospects and living conditions for many.”

A solution, Kim said, is moving the Assembly, the Blue House and other government institutions to Sejong.

“This can help solve the problems of severe urbanization and real estate issues,” he said.

The Sejong Special Autonomous City was developed in the heart of the Chungcheong region in 2005 to move the country’s administrative center out of overcrowded Seoul.

As of June this year, 43 government ministries and bodies have moved there, including the Office of the Prime Minister, the Ministry of Economy and Finance, Ministry of Land, Industry and Transport, Ministry of Environment, Ministry of Health and Welfare, Ministry of Culture, Sports and Tourism and National Tax Service.

The move was always controversial, especially any move of the Blue House and legislature, which must be in the capital. When the Roh Moo-hyun administration designated Sejong as the administrative capital in 2004, the Constitutional Court nullified the decision by calling it unconstitutional. It said that while the Constitution does not spell out that Seoul is the capital city of the country, it has been for some 600 years and any decision to change that would require amendments to the Constitution and widespread public agreement.

“It’s a done deal since the ruling in 2004,” said Kim Jong-in, the opposition United Future Party's emergency committee chairman, in a meeting with the press on Monday. “I don’t think they can undo the ruling now.”

Other issues that DP floor leader Kim brought up in his address included skyrocketing apartment prices in Seoul and surrounding areas.

“People save up for decades but still cannot save enough to buy houses in Seoul and surrounding areas,” Kim said. “This is no justice. It is time to do away with speculation in the real estate market [...] The government announced measures to address the real estate market on July 10 [and] the DP will try to pass a law at the Assembly in July to ensure these measures are followed through.”

The Finance Ministry announced on July 10 a set of measures designed to cool off the real estate market, including raising taxes for owners of multiple homes. The measures need approval at the Assembly.

Kim also touched on the government’s recent announcement of its so-called Green New Deal, or investments in renewable energy including smart grids.

“The DP will work with companies to create smart cities throughout the country, which will utilize big data and artificial intelligence for a greener economy and mobility,” Kim said. “One of the election pledges of the DP was to create a zero-carbon society by 2050. We will work hard to make sure that such concrete policies go into legislation on the Green New Deal.”

Kim emphasized the need for the government to issue detailed policies on renewable energy.

“Korea has the world’s best technology for solar energy and electric cars and batteries; we are also growing in the field of hydrogen cars,” he said. “But our record on renewables is so low, it’s a pity that we are at the bottom of the list among OECD [Organization for Economic Development and Cooperation] nations when it comes to renewables. We need to change this around.”

As part of his remarks Kim also mentioned the upcoming presidential election in the United States, adding that a parliamentary visit from Korea to Washington ought to take place before November.

In calling for resumption of business at the Kaesong Industrial Complex and tourism to Mount Kumgang, Kim asked for cooperation from members of the opposition parties.

“I hope that members of the opposition parties will see the urgency in the need for a concerted effort in Korea when it comes to addressing inter-Korean issues,” Kim said.