Only four of those cases were due to local exposure to the virus, the first time in two months that the number sunk to a single-digit figure.

Health officials announced the good news Monday morning as Korea marked its sixth-month anniversary since the first coronavirus patient was detected in the country.

That first patient was a Chinese woman from Wuhan — the early epicenter of the pandemic — who arrived at Incheon International Airport on Jan. 18 to shop during the Chinese Lunar New Year holidays. She was stopped by local customs officials who detected her symptoms of the virus, testing positive two days later.

But Korea’s latest Covid-19 statistics were not all rosy. Among the 26 people who tested positive Sunday, 22 contracted the virus abroad, up from 13 such cases compared to the previous day.

Data from the Korea Centers for Disease Control and Prevention (KCDC) showed nine people were infected in the Philippines; three in Pakistan; two each in the United States, Mexico, Iraq, Kazakhstan; and one each in Indonesia and Kyrgyzstan.

In terms of local exposure to the virus, two people who were diagnosed positive Sunday were found to be living in Seoul, with one each in Gwangju and South Jeolla, said the KCDC.

One more person died of the coronavirus Sunday, bringing the country's death toll to 296 people, while 903 people had been declared fully recovered, up nine from the day before. 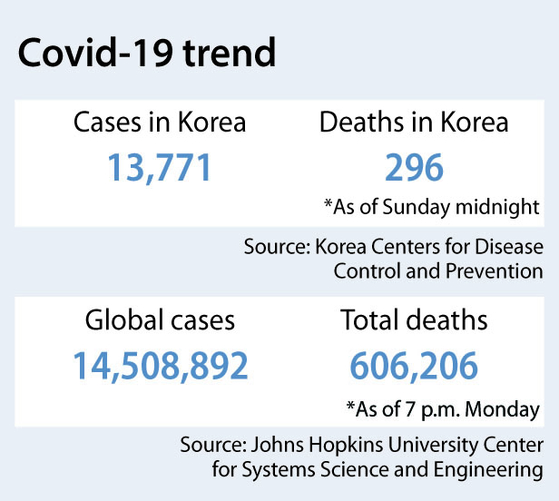 A new cluster in Gangseo District, western Seoul, also rang alarm bells for health officials Monday, after authorities learned that nine new patients have been traced to the same nursing facility for the elderly.

The first patient was detected Sunday, and at least eight other people tested positive Monday during contact tracing, all of whom Seoul government officials identified as users of the facility.

How and where the first patient contracted the virus is yet unknown, and the nursing home has temporarily been shut down.

In Incheon, police said a 24-year-old man in the city who taught children at a private cram school, or hagwon, has been referred to prosecutors on recommendations of indictment for lying to epidemiologists about his job status after coming down with the coronavirus.

Incheon police said the hagwon instructor claimed he was jobless, which delayed contact tracing efforts and allowed his infected students to unwittingly spread the disease among their respective social circles. More than 80 infections were consequently traced to the teacher, about 40 of whom were students from elementary through high school in Incheon.

Health officials believe the instructor got infected while partying at night clubs in Itaewon, central Seoul, on May 2 and 3, which later turned out to be a major hot spot that led to nearly 300 subsequent Covid-19 infections.

Incheon police said the suspect admitted to his wrongdoing and said he lied because he “freaked out” upon realizing he had contracted the coronavirus. Officers said he was in stable condition after being discharged from the hospital on July 6. He has since been in police custody.

As summer vacation approaches, Health and Welfare Minister Park Neung-hoo pleaded with the public Monday not to flock to crowded travel destinations, and instead consider a staycation — or taking time off from work but staying at home.