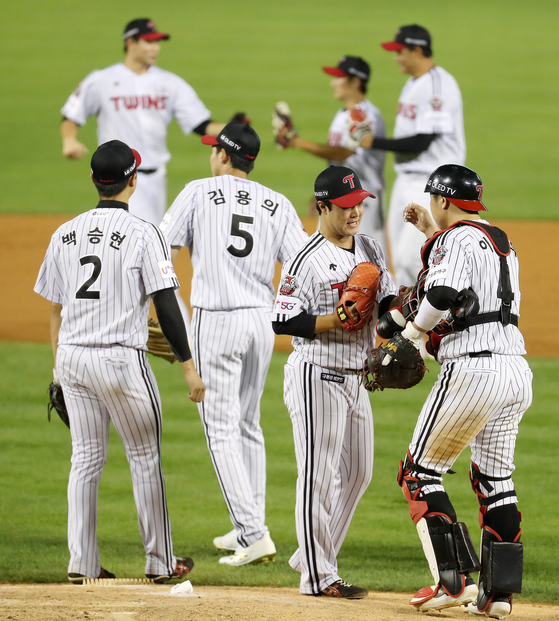 LG Twins players celebrate after picking up a big 8-0 win against the Hanwha Eagles at Jamsil Baseball Stadium in southern Seoul on Friday. [NEWS1]


The LG Twins were the only club in the KBO to sweep their series this weekend, sending the Hanwha Eagles to an even-more distant 10th place in the standing.

The Twins picked up a huge 8-0 win on Friday followed by a 3-1 win on Saturday and a 6-2 win on Sunday, sending the Eagles back to Daejeon with their wings clipped.

The Eagles are falling further behind, now 27 games behind the NC Dinos at the top of the table. Over the last month, there have been many position changes in the league, but three things have remained constant — the Dinos at the top, the SK Wyverns in ninth and the Eagles at the bottom.

Although the Eagles are currently in a four-game losing streak, they did see some positive news from new foreign player Brandon Barnes.

Barnes has only appeared in two games so far, but is already making headlines with four hits and an RBI with a 0.500 batting average against the LG Twins.

At the other end of the table, the Dinos had a much better weekend.

The Dinos faced the KT Wiz over the weekend, with their first game on Friday ending in a rare 3-3 draw. On Saturday and Sunday, the Dinos came back with vengeance, picking up 6-1 and 8-2 victories to come out on top.


Koo Chang-mo, the Dinos’ starter for Saturday’s game, continued his streak by tossing seven scoreless innings. Throughout the seven innings, he only gave up two walks and two hits to keep his ERA below 2.00. Koo is now ranked at the top in the KBO’s ERA category at 1.35, strikeouts at 92 and wins at nine. Following Saturday’s victory, Lee Jae-hak continued the Dinos’ streak.

With a record of two wins and a draw, the Dinos extended their lead by 5.5 games against the second-ranked Doosan Bears.

Although the Wiz picked up two losses, outfielder Mel Rojas Jr. continued his strong performance. Rojas may be having his best season in the KBO, as he is currently topping the majority of the KBO’s year-ending awards category. Currently, Rojas leads the league in batting average at 0.387, home runs at 12, RBIs at 60, and is tied for the lead in hits at 99 and slugging percentage at 0.730.

The Bears’ Jose Fernandez leads the league in runs at 58, hits at 99 and on-base percentage at 0.441. While the two foreign players dominate the rankings in the batting categories, the Kiwoom Heroes' Seo Geon-chang has one offensive category locked up: stolen bases at 16.

Starting this week, there could be a possible ranking change in the second and the third ranked teams, as the Bears and the Heroes face off at Jamsil Baseball Stadium in southern Seoul. Throughout the season, the two clubs have been swapping the second and third spots. Thanks to the Bears’ two wins over the weekend against the Kia Tigers, they are now one game ahead of the Heroes.

The two clubs have the same number of wins at 38, but as the Heroes have played two more games than the Bears, the Bears are ahead in winning percentage at 0.594.

Things could change within the next few days as the teams are scheduled to start their week against each other. Tuesday’s game will see two of the top-ranked pitchers in the KBO face off, Eric Jokisch for the Heroes and Raul Alcantara for the Bears. The two are currently tied with the Dinos' Koo and Drew Rucinski to top the league in wins at nine.

The Bears and the Heroes are the ones to watch this week, but the weekend will see another big match up between the two mid-ranked teams as the Kia Tigers will take on the Samsung Lions. The rankings could change during the week, but as of Monday, the Tigers, at fifth, are ahead of the Lions by 0.5 games. Either team could break into the top four this week, as the No. 4 Twins are only 0.5 games ahead of the Tigers, despite their dominant performance over the weekend.

The series between Doosan and the Heroes is the only a midweek match-up this week in Seoul. In Incheon, the Lotte Giants will face the Wyverns at Munhak Baseball Stadium. In Suwon, the Wiz will host the Twins, while the Tigers head to Daejeon to take on the Eagles. Down in Changwon, the Lions will head into the Dinos' den for their three-game series.