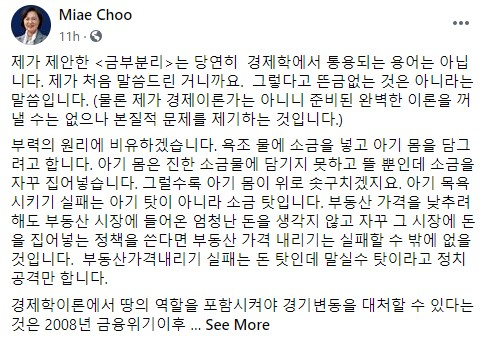 The idea seems to be that banks should stop making real estate loans, though many observers are still scratching their heads, while the exact meaning of the comment remains a matter of debate.

She doubled down over the following days, saying “banks should take their hands off of land,” and the government “should not ignore the odd connection between bank loans and real estate.”

In responding to criticism, Minister Choo acknowledged her proposal is not “an idea used in mainstream economics.”

The JoongAng Ilbo reached out to five economists to get their thoughts on the minister’s curious post. 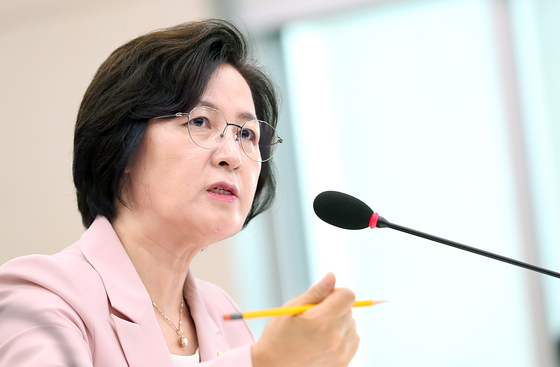 Justice Minister Choo Mi-ae answers questions from other lawmakers at a plenary session at the national assembly. [YONHAP]


“I think her suggestion means that the government should stop people from financing the purchase of real estate. But you cannot barter one property for another property. Does it mean [the government will] put an end to real estate transactions?” asked Lee Tai-ki, a research fellow at the Korea Institute of Finance.

“Finance is like the blood that flows through the market, so it does not make sense to separate the real economy from finance. Just because housing prices are rising from speculation, stopping all financial activities related to the real estate market is like throwing the baby out with the bathwater,” said Lee.

Most experts responded strongly to minister Choo’s use of the word “separate,” considering the fact that housing loans have already become an integral part of the housing market.

Economics professor Ha Joon-kyung of Hanyang University, described minister Choo’s proposal as “extreme” and said he assumed Choo may have been trying to say that the government should “separate the housing bubble from the market.”

“Real estate is the most important asset for ordinary people, so we cannot approach this issue thinking as if the two are separate things," Sung Tae-yoon, an economics professor at Yonsei University pointed out.

Underpinning minister Choo’s comment is a negative view of people using leverage to make profit. In economics, it is a natural mechanism of the market for finance to follow profit.

“Finance does not discriminate between assets. It follows the profit,” said Nam Joo-ha, a professor of economics at Sogang University, emphasizing that the all-or-nothing mentality that corporate loans are good and real estate loans are evil does not work in the world of finance.

“The government needs to come up with policies that acknowledge the market principles. Straight up regulations and control will not help,” said Nam.

Others raised concerns that the justice minister’s stance can underestimate the role of finance.

“It’s not wrong for a distribution channel to be more profitable than manufacturing. We cannot say that finance is less important than the real economy. The proposal is aiming at the wrong target,” criticized researcher Lee. 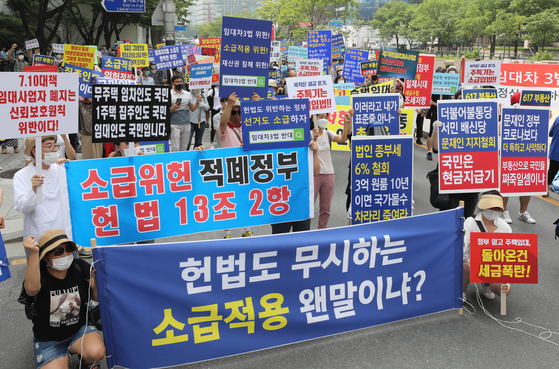 
Experts offered their view of what would happen if the government considered real estate finance as the culprit of the housing crisis and decided to get rid of the system completely.

“In any country, real estate is an important channel to build assets,” said professor Sung.

“If the government stops people from using loans to buy houses, it will prevent younger people from accumulating assets,” professor Sung said, adding that “paying off loans to create bigger profits in the future can be considered another way of saving money and should not be regarded with hostility.”

Experts agreed that while the government can curb demand for real estate loans through regulation on loans and tax policy, it’s not an ideal solution to separate the two completely.

Professor Ha of Hanyang University suggested adjusting the debt service ratio based on an individual’s income so that the rate can stay under 40 percent of income level.

“I think minister Choo wanted to let the public know that she is interested in real estate policies. Now is the time to change the tax policies, imposing higher rates on the wealthy or net assets and lower rates on earned income, which can send a message to the general public that people should work to make money,” said Jun Sung-in, an economics professor at Hongik University.