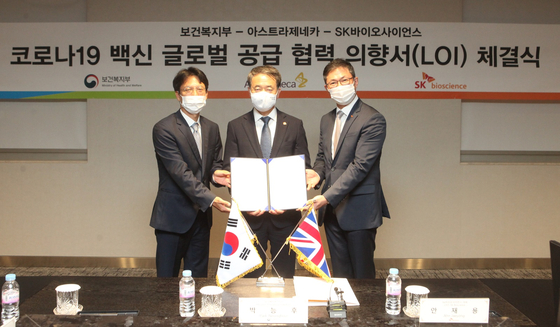 
SK Bioscience has been selected as one of the global suppliers for Cambridge, Britain-based AstraZeneca’s Covid-19 vaccine candidate, AZD1222.

This is the first time a Korean bio company has been selected as the supplier for a Covid-19 vaccine.

To date, AstraZeneca’s AZD1222 is at the forefront of a global race to develop a vaccine against Covid-19. The vaccine candidate started Phase 3 clinical tests in Britain, Brazil and South Africa in June, earlier than any other competing substances.

Interim results of Phase 1 and 2 clinical trials shared Monday showed that neutralizing activity against the Covid-19 virus was observed in all 1,077 participants after a second dose of vaccination.

On Tuesday, officials of SK Bioscience, AstraZeneca and the Ministry of Health and Welfare got together to conclude a letter of intent with three shared goals: ensuring fast and stable production and exports, strengthening production capacity to cope with demand and securing domestic supply of the vaccine.

A bio pharmaceutical affiliate under SK Chemical specializing in vaccines, SK Bioscience will start manufacturing AZD1222 for AstraZeneca from this month as a contract manufacturing organization (CMO), under a separate contract signed between the two on Tuesday.

“Production will take place at our vaccine factory in Andong, North Gyeongsang, after we discuss the manufacturing plans in detail with AstraZeneca,” SK Bioscience said in a statement.

The produced vaccines will be used for development and clinical trials until the British pharmaceutical company fully succeeds in developing the vaccine for commercialization. A CMO contract signed between SK and AstraZeneca at the moment expires in early 2021, but SK said talks are ongoing about extending this period longer if AZD1222 indeed makes it to the very end.

“SK’s cutting-edge expertise and ability to manufacture large quantities at pace is of global significance. Throughout the pandemic, Korea is emerging as a leader and we are deeply grateful for the government’s support. Going forward I hope that we can further strengthen our collaboration to accelerate broad and equitable access to all those who need it,” said AstraZeneca CEO Pascal Soriot in a statement.

Having participated in talks between the two firms from the very start, the Ministry of Health and Welfare’s role in the partnership is ensuring swift commencement of production and stable exports to AstraZeneca’s global markets.

Details were not disclosed on where AZD1222 produced in Korea will go, but the Ministry of Health stated in a Tuesday statement it will “continue efforts to ensure a proportion of SK’s vaccine produce is supplied to Korea.”